What Do Tadpoles Eat In The Wild? What Do they Eat In Ponds? [Updated]

Table of Contents show
1 What Do Tadpoles Eat In The Wild? What Do they Eat In Ponds? [Updated]
1.1 Natural Food Sources for Tadpoles in the Wild
1.2 When and How Often Do Tadpoles Eat?
1.3 Tadpole Cannibalism
1.4 Tadpoles as Prey
1.5 Benefits of Having Tadpoles in Your Pond

Skittish, seemingly docile at times, and endlessly fascinating to watch – tadpoles are a healthy addition to your ornamental pond. They are active foragers that will seldom bring considerable harm to your fish or pond plants. At this fragile stage of their lives, they generally keep close to areas that afford them shelter, and you’ll find that they seldom stray far from cover.

Searching for food is a tadpole’s main occupation! Escaping from predators is a close second, and the trade-off between these two is pretty much what rules their fully aquatic lives. Unable to survive outside of water, tadpoles are not picky eaters and must rely on whatever they can find in the water column, on the pond floor, or at the water’s surface. They tend to consume all organic matter that floats, as long as it can fit into their small mouths. As they feed in a head-down orientation, they can move their tails in a wave-like fashion to direct suspended food into their mouths.

Tadpoles are the juvenile forms of frogs, toads, newts, and salamanders. Regardless of species, they usually eat what is readily available or within very close proximity to their shelter. When they venture far away from cover to hunt, this may mean that aquatic vegetation or algae are scarce. In extreme cases of food shortage, they may even nip at each other! As they can consume both plant-based material and meat, tadpoles can be categorized as omnivores. However, in ponds that are rich in algae and vegetation, some species may exclusively live through this life stage as herbivores. 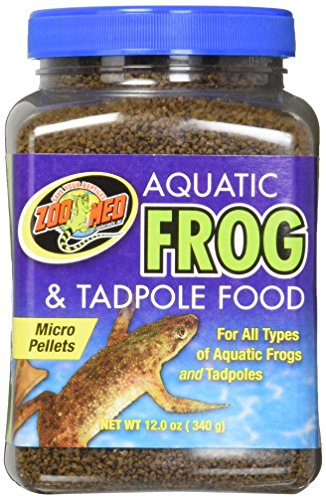 Natural Food Sources for Tadpoles in the Wild

Upon hatching, tadpoles can live for up to two weeks on their remaining yolk. Once all yolk is consumed, they become free-swimming individuals that must forage for food in order to survive. In the wild, this means searching for small organic material on detritus or along the surfaces of vegetation. This is normally composed of algae, mats of bacteria, mosses, protozoa, and decaying matter.

They must search for larger pieces of food as they increase in size, at which point they may begin to develop a taste for protein-rich food. This includes insect larvae, small worms, water fleas (e.g. Daphnia), water striders, frog eggs, and fish eggs. At this point in their lives, they will happily scavenge on the remains of larger organisms, provided potential predators are not close by. These highly nutritious food sources can quicken the pace of their development.

When and How Often Do Tadpoles Eat?

Tadpoles eat very frequently because they need to grow quickly at this stage of their lives. They eat almost all the time, in fact, as they lack the feeding inhibitors that are needed to signal ample satiation. Feeding levels are heightened during the day when their vision is best. It is also safer for them to feed at this time as they require bright light to survey for potential predators.

When natural resources are sorely limited, tadpoles may sometimes resort to eating one another! It’s important to remember that these tiny creatures, like most wild animals, will do whatever they can to survive. If that means eating their kin, they won’t hesitate. This is simply foretelling of what’s to come, as some amphibians can grow to be quite carnivorous.

Fortunately for the faint of heart, studies on tadpole cannibalism show that tadpole meat is certainly not a preference over other food sources. It is simply a means of survival that tadpoles consider in the face of starvation. When presented with alternative food sources, such as brine shrimp and cornmeal, they opt for the most protein-rich option and avoid the tadpole meat.

Tadpoles, themselves, are quite a nutritious food source for larger pond inhabitants. As the tadpole stage in a frog’s life cycle lasts, on average, from 1 – 3 months, a large portion of each new batch of hatchlings will invariably become prey. Even older tadpoles may regularly prey on smaller ones, as they can mistake them for the larvae and fry of other species. Other common predators include turtles, carnivorous insects, birds, and pond fish.

To increase the chances of tadpole survival, it is important to enhance your pond’s structural diversity with both floating and submerged aquatic vegetation and other features (stones, rocks, logs, etc.). Having baskets of plants strung along the sides of your pond or marginal plants covering the shallow areas may provide tadpoles with more hiding places. These also increase the surface area on which they may find organic nourishment.

Benefits of Having Tadpoles in Your Pond

As both prey and predator, tadpoles are an important part of the food chain in ponds. A small population can help maintain the cleanliness of your pond and reduce the proliferation of unwanted insect larvae. They can help control algal populations and prevent these from smothering your aquatic vegetation.  Apart from serving as an occasional protein-rich treat for your pond’s inhabitants, tadpoles will inevitably turn into amphibians (if all goes well), which are often indicative of ideal pond conditions!

2 thoughts on “What Do Tadpoles Eat in the Wild in Ponds? [Updated]”