Table of Contents show
1 Fish Lice Treatment Guide 2021 (How to Get Rid of Lice in My Pond Or Lake)
1.1 What Are Fish Lice? Are They Dangerous?
1.2 Where Do Fish Lice Come From?
1.3 Understanding the Life Cycle of Fish Lice
1.3.1 How Long Do Fish Lice Live?
1.3.2 When is the Best Time to Treat Fish Lice?
1.4 Koi Fish Lice Infection Symptoms
1.4.1 1) Lethargy
1.4.2 2) Hemorrhages
1.4.3 3) Paleness
1.4.4 4) Flashing and Flicking
1.4.5 5) Scale loss
1.4.6 6) Fin Erosion
1.4.7 7) Excessive Mucous
1.4.8 8) Rubbing
1.4.9 9) Secondary Infections
1.5 Best Koi Fish Lice Treatments (How to Get Rid of Fish Lice In Ponds & Lakes)
1.5.1 Option 1: Diflubenzuron (Dimilin-X)
1.5.2 Option 2: Cyromazine (MICROBE-LIFT/Lice & Anchor Worm)
1.5.3 Option 3: Potassium Permanganate
1.5.4 Natural Alternative Options
1.6 How to Prevent Fish Lice From Coming Back (Tips)
Argulidae, the fish lice family, is well adapted to a variety of environments, including both marine and freshwater systems. Even carefully built and maintained garden ponds that are kept healthy can become infected, though the fish louse is less common than other aquatic parasites.

Contrary to the implication of their name, fish lice are not actually related to lice, which are insects, but instead are parasitic copepods. They’re more closely related to shrimp and crabs than to lice or insects.

If latched onto by a carp louse, fish become vulnerable to a host of secondary issues such as infection and disease that can become lethal if fish lice are not treated immediately, so it’s very important to be aware of what lice are, the possible symptoms, and how best to treat the infection!

What Are Fish Lice? Are They Dangerous?

Fish lice, also known as carp lice or koi lice in ponds, are parasitic crustaceans that are thought to be quite prehistoric based on their morphology. However, due to their small size and obvious lack of bones or other sturdy structures, they possess no fossil record so scientists can only speculate at their exact evolutionary record. They are able to live in both freshwater and marine environments, making them a potential problem for almost any type of fish!

With over 170 recognized species, fish lice are found all over the world and are all well-suited to many small ecological niches as well as entire, broad ecosystems. Most members of this family are between 3 and 35 millimeters in size, or ranging from a length equivalent to only the width of two pennies up to over an inch, depending upon the species, location, and life stage.

Most Argulidae members have a broad, ovular body shape covered by a carapace, somewhat similar in appearance to the common ticks that are found in forests and grasslands.

However, fish lice have quite visible black eyes, antennae that have fused together to form a barbed proboscis that also house easily observable suckers for latching onto fish, and typically four pairs of spiny, leg-like appendages stemming from their thoracic region (the area that includes the thorax and abdomen). With their sucking mouthparts, they feed on the mucus, blood, or both of the fish that they attach to.

The naked eye can typically determine when fish lice are present, as even the smaller species are just large enough to see clearly, though if you aren’t sure a microscope can of course be used to aid in identification.

Where Do Fish Lice Come From?

Fish lice are somewhat common on commercial fish farms, and can be transferred to your pond by purchasing from such places. Some species will also attach to frogs, salamanders, and the like, and can wind up in your pond as these creatures move about throughout their day to day activities.

In some cases, they can spread by being accidentally ingested by birds and then released into new areas via their excrement. They can also be transferred through water, particularly if you fill up your pond using a nearby natural water source rather than filtered water from a hose.

As is the case with most parasites, fish lice are able to soak up pollutants at higher concentrations, and still survive, much longer than other organisms. In fact, some parasites that have been studied have been found to have around 2,500 times the amount of heavy metals in their system than the fish that they were feeding on. As such, fish lice and some other aquatic parasites are being studied as a means of early metal pollution detection in freshwater ecosystems.

Unlike many other parasites, fish lice don’t lay their eggs on the host. Instead, after fertilization the female lays her eggs in substrate at the bottom of the water or on vegetation, and secures them with a mucousy, gelatinous material that she expels.

About a day after being laid, eggs will turn a light brown color and within a few days, two dark black spots will become visible on one end of each egg. Though this depends somewhat on the species, fish louse eggs typically hatch about 12 days after being laid, so long as water temperatures are between approximately 80 and 82° F (27 to 28° C). Lower temperatures will result in longer hatch times – at 59 °F (15° C), eggs take closer to 60 or more days to hatch, with warmer temperatures resulting in hatching as early as a week.

After hatching, the larvae have only two or three days to find a fish host before dying of starvation. Once attached, they’ll undergo several molts as they grow and develop into adults. Both males and females are parasitic, and they can either remain attached or detach from the fish to mate at around a month of age. Females will then detach from the fish to lay their eggs, and then reattach to its host as the cycle begins anew.

How Long Do Fish Lice Live?

Adults can live for as long as 60 days, and up to 3 days without a host. In hatched in the autumn, juvenile fish lice are capable of surviving over the winter within fish’s protective mucus membrane. However, fish lice cannot typically survive for long if water temperatures fall outside of the range of 68 to 95° F (20 to 35° C), and will reproduce quite rapidly when temperatures are between 68 and 82 (20 to 28° C).

When is the Best Time to Treat Fish Lice?

The best time to treat for fish lice is during their larval stage, if possible, as they must molt multiple times in a short span of time and will be more likely to be impacted by chemical treatments.

The most obvious sign of fish lice infestations are the presence of fish lice on your fish, which look like small green or brown dots. However, when these are not visible, there are a variety of other signs and symptoms to watch out for.

Fish lethargy is caused by anemia if fish lice have been attached long enough.

Hemorrhages, or blood pooling at the surface of the skin due to blood vessels bursting, can be found around sites where fish lice are or have been attached.

Paleness, or a dulling in color, is due to blood and nutrient loss from fish lice.

Flashing and flicking behaviors are most often exhibited when fish are uncomfortable and are trying to alleviate their skin discomfort and pain.

Scale and skin loss is common when multiple fish lice have attached themselves.

If plagued by fish lice, you may notice your fish’s fins becoming tattered and decreasing in size as blood and nutrients are lost through parasitism.

This response typically occurs toward the beginning of fish lice parasitism, as the fish’s body is trying to defend itself. However, many fish lice will simply just feed on this mucous.

Affected fish are likely to be seen rubbing against rocks, plants, and pond edges to try and rid the fish lice from their skin.

The longer that your fish have been infested, the more likely it is that they’ll develop secondary infections such as koi herpesvirus, larval nematodes, ich, and fungal infections. If you notice these symptoms, chances are that fish lice have been around for some time.

As with any chemical, you must pay close attention to the label and follow the dosage instructions precisely to prevent harm to your fish or other pond inhabitants. It’s recommended to treat infected fish in a quarantine tank instead of treating the entire pond, as this places less stress on the system. 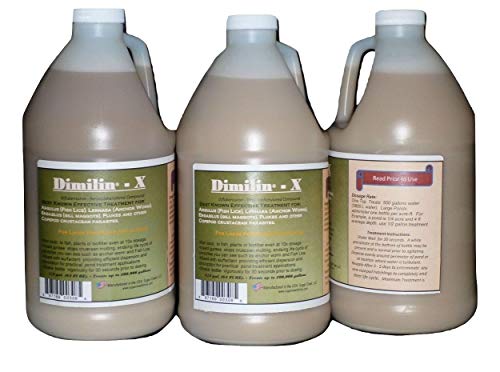 We normally advise that chemicals be used as a last resort, but in the case of fish lice, they’re just about the only surefire way to rid your pond of them entirely. Diflubenzuron is effective on both juveniles and adults, disrupting molting and damaging the protective exoskeleton. The treatment is also effective at destroying eggs, but you still may need to repeat the dose for total eradication. 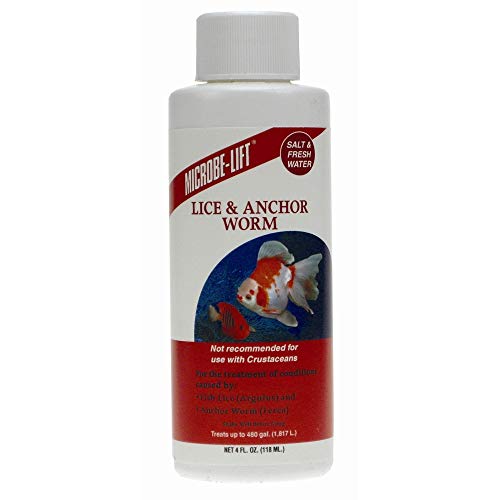 Cyromazine is also quite effective, as fish lice are quite sensitive to this compound, and it’s a good second option if diflubenziron is not working. Both eggs and emerging larvae have been found to die from cyromazine treatments, but they can build up tolerances, so you may need to switch between treatments if lice outbreaks are a common occurrence.

Potassium permanganate is effective at killing off larvae and adults, but does not seem to impact eggs, so  we don’t really recommend this option unless you have no access to the other treatments listed here.

To make certain that even eggs are eradicated, a partial or full water change is advised (after removing all fish and plants to a safe alternate pond or tank that will then be treated for any adult or larval fish lice), with disinfection of substrate (if possible – this will, of course, not be possible in earthen ponds). The pond can be allowed to fully dry out for several days so that eggs dehydrate and are no longer viable. If your pond has a liner, you should also thoroughly disinfect it during this dry period.

How to Prevent Fish Lice From Coming Back (Tips)

First and foremost, improving your water quality is perhaps the greatest thing that you can do to prevent fish lice from establishing in your pond. Perform regular water changes, keep water well filtered (as with many parasites, fish lice seem to prefer water that is slightly to even very polluted), aerate properly so that dissolved oxygen levels are at 8 parts per million at a minimum, and check pH levels, temperature, and all other water quality parameters daily.

Anytime that you obtain a new fish, quarantine it first for several days to observe it. Any parasites or infections that the fish has should manifest itself during quarantine, and can then be treated before it’s able to spread to your entire pond.

Make certain that you are providing quality, balanced nutrition so that fish immune systems are healthy and better able to fend off parasites and secondary infections. When performing water changes, you can first look at several samples of the water under a microscope to check for any pathogens or parasites that may be present.