Phragmites (Phragmites australis), also known as the common reed, is a species of subaquatic grass that can be found in North America and Europe. While there is a rare variety that is native to portions of the U.S. and Canada, a non-native, highly invasive variety arrived unintentionally from Europe sometime in the early 1900s via ships. In addition, up until a couple of decades ago, both the public and agencies such as the Department of Natural Resources were planting phragmites for ornamental purposes as well as to provide wildlife cover during habitat restoration projects. Now that its negative impacts are better understood, the opposite is true and massive efforts are being undertaken across much of the country to eradicate the species.

This invasive species grows in dense (more than 100 shoots per square meter!), 15 foot tall stands that choke out other vegetation, capable of forming thick underground rhizome mats at a rate of approximately 30 feet per year. Found by the U.S. Fish and Wildlife Service to notably diminish native flora and fauna populations, this grass is a substantial fire threat as masses of it die and dry up each autumn, and also creates an impenetrable mass that fish, waterfowl, beavers, and even deer cannot move through. Throughout much of the United States, phragmites has taken over wetlands, posing an acute threat to these vital and already-struggling ecosystems.

Much like cattails, the speedy establishment and spread of invasive phragmites can be attributed to seed dispersal by wind and animals as well as sprouting from a shared rhizome or small group of rhizomes underground. Each rhizome is capable of propagating dozens to hundreds of new plants. Young phragmites can also reproduce quickly by sprouting stolons aboveground. Phragmites typically prefers still or slow-moving water, and as such are of particular concern in lakes, wetlands, and ponds, including your personal backyard pond. As you may imagine, this species is difficult to control once established, but there are steps that you can take to remove it and prevent further spread.

The Best Natural Ways to Control Phragmites (No Chemicals)

This method has mixed results, as it may not always completely wipe out the population if the rhizomes don’t die off. You can conduct this method by hand (though this may be a tedious approach if you have a prominent phragmites population), cutting at or just above ground level using scissors, shears, or a weeding sickle. You can also cut using a brush cutter or weed whacker, but this should be done several inches above the ground to reduce the likelihood of damaging small mammals or native vegetation.

Ensure that you are cutting below the meristem, as cutting above it will only promote growth (this is why mowing your lawn can sometimes result in rapid grass regrowth). You can greatly minimize the chances of this occurring by cutting in late fall or after the ground has frozen, as the plant will not be able to grow and is more likely to die off. You’ll also have to be very thorough in cleaning equipment and clothing after, else you may unintentionally spread rhizomes and seeds to new areas.

Hand pulling phragmites is another approach, though it is considered difficult since they typically have extensive rhizome systems belowground. If you don’t pull up all of the rhizomes, the plant will simply resprout.

You can utilize an aquatic rake to help pull them up, but be aware that doing so may simply break the rhizomes rather than removing all of them and, again, the phragmites will just regenerate (are you beginning to get an idea of why this plant is so tricky to manage?). Again, be sure to clean off any equipment and clothing afterwards to ensure no seeds can be transported to other areas where they can begin to spread.

Generally an effective method when used in conjunction with herbicide, burning will not only destroy the portion of the grass that is aboveground, but will also heat up the soils and dry out the rhizomes and any dormant seeds, killing them as well.

Prescribed burns are now recognized as ecologically essential in a variety of ecosystems, as burning historically occurred naturally and helped ecosystems remain healthy and diverse without any one species outcompeting the rest. Fire is often viewed as negative, and as such has been unnaturally suppressed by humans for many decades. This has led to invasive species such as phragmites being able to spread with little resistance, increased fire severity when fires do actually occur (California, for example), and inhibits fire-dependent species like oak and sequoias from regenerating.

However, because this method is obviously dangerous, you will either need to obtain a burn permit from the Department of Environmental Quality, or contact a land management agency such as the Forest Service, DNR, or Fish and Wildlife Service to see if they can help you out (because phragmites is such an issue, they likely would if possible).

Burning will also need to be repeated for several years to ensure that phragmites is fully eliminated from the area, and is typically conducted during winter when soil moisture levels are the lowest (this safeguards that the rhizomes will also be killed off). Keep in mind that burning could also impact your pond’s residents; they may need to be relocated while the burn is occurring if they are not tolerant of water temperature increases.

The Most Effective Chemical Methods to Remove Phragmites (Best Herbicides)

Though natural approaches are preferable and less harmful to other organisms, in the case of phragmites they are unfortunately not always the most effective and can sometimes make the issue worse. Manual removal methods prove the most successful and efficient in smaller water bodies, such as garden ponds, though when used carefully and appropriately, chemicals have demonstrated the greatest success overall with phragmites control and extermination.

As mentioned in previous articles, any chemical that is designed to kill something will have adverse impacts on other things as well and should be used with great care. This risk decreases somewhat as the size of the water body increases, and so chemical approaches are typically better suited to lakes. You will also likely need a license to apply most chemicals, or you may need a professional to treat the area (you could hire someone or, again, a registered environmental agency like those listed earlier may be able to help).

There are two herbicides that are currently approved for use on phragmites: glyphosate and imazapyr. Be aware that both of these chemicals will kill or at least damage any other plant that they come in contact with, so be precise when applying them and pay close attention to all instructions and regulations listed on their labels. To maximize your shot at defeating (or at least reducing) phragmites, try using cutting methods about two weeks after herbicide treatment. The herbicide will by then have had enough time to work its way through the plant, and will prevent the cutting from inadvertently stimulating further growth. More information on these herbicides can be found below:- 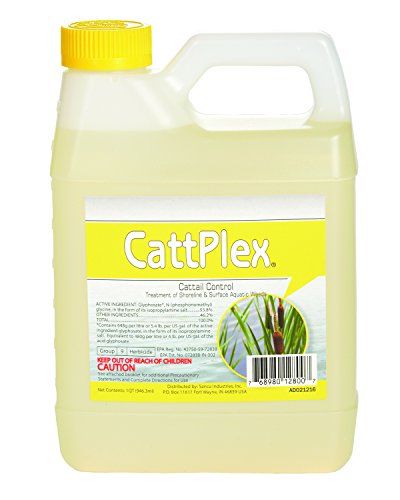 Glyphosate can be used by landowners on their own property without a special license, though you will need to be certain that you are only using the form that is approved for wetlands. Popular and effective glyphosate products include Rodeo, Aquamaster, and Aquaneat.

Regardless of the product you choose, again make quite sure that they are listed as an aquatic herbicide (it will say on the label), as it is illegal to use non-aquatic herbicides in aquatic ecosystems, including your own ornamental pond or lake. Glyphosate is easy to obtain and cheaper than imazapyr (below), though not as effective because it does not persist in the soil. The perk of that is a reduction in the potential for adverse impacts on other plants, fish, soil invertebrates, and so on. 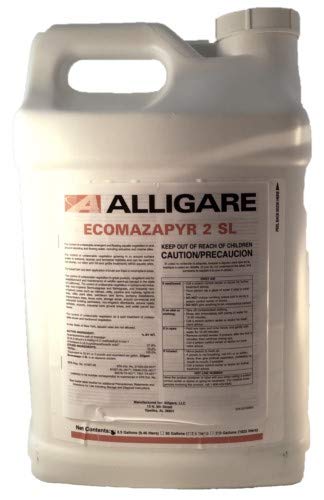 Imazapyr has greater success with killing off phragmites, but persists in the soil and as such is prone to killing off native plants in the area as well. Because of this, it is recommended that imazapyr be used only when phragmites are well-established, extensive, or cannot be removed using alternate methods.

The only wetland-approved form of imazapyr is Habitat, and because of its volatile nature is only allowed to be applied by a certified or licensed aquatic pest control applicator. According to the label, it also cannot be used within a half mile upstream of a freshwater source that is used for food or water consumption. You also shouldn’t plant anything until a year after treatment, as imazapyr may still be present in the soil and could be taken up by the plants.