While the warmer months of the year are times we look forward to because it is when most plants are blooming an array of colors, having a water garden can pose a particular problem during this season: providing a breeding ground for mosquitoes.

A garden can provide beneficial habitat that attracts native pollinators and other local wildlife, so it is counterproductive to use pesticides/insecticides as a solution to these pesky insects. Rather than spraying anything that could cause harm to wildlife, children, or pets close to home, it is preferable to go a more natural and organic route.

During the day, mosquitoes tend to spend time out of the sun, so common areas where people might want to enjoy their garden in a cool, shady spot can quickly become unpleasant. Growing shade plants that also repel mosquitoes is the perfect solution! Natural insect repelling plants are popular because they are very fragrant and some are edible, but only a few can also thrive in the shade.

Gardeners can easily make use of available shade and create a patio garden because many shade-tolerant plants do well as potted plants. A common feature of these shade tolerant plants is that they should be kept in moist, but well-draining soils. Below are some examples of plants that may help keep your shady oasis pest free. 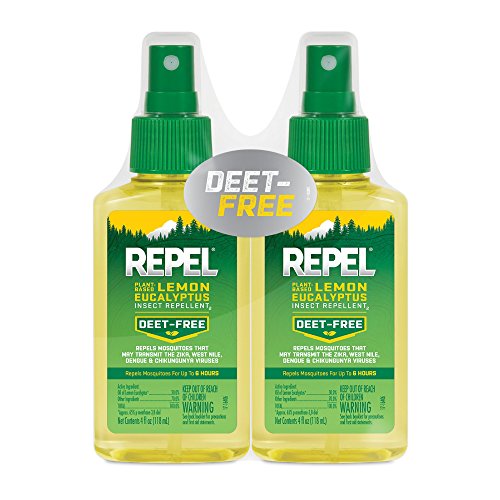 There are quite a few varieties of mint that you can grow at home in a shady spot, and which possess larvicidal and insecticidal chemical compounds (primarily derivatives of menthol and piperitenone) that are unattractive to mosquitoes! Just a couple of examples are peppermint (Mentha piperita), spearmint (Mentha spicata), and apple mint (Mentha suaveolens).

Mints are perennial herbs in the family Lamiaceae and the genus Mentha, which is a genus that is widely distributed across the world, hardy, and invasive in some areas due to their high rate of growth. We recommend researching mint species native to your particular area to determine which are shade-tolerant and will work best in your location.

Mints as a whole don’t require much special care to thrive and tends to grow rapidly through underground runners, so some people prefer to grow them in a pot so that they don’t overtake other plants in the garden. Mints should be kept well-watered, and if not contained could do well at the edge of a water garden. There are even a few species referred to as “water mints,” including Mentha aquatica, which tolerate a few inches of water. This species is hardy in zones 3-10 and winter tolerant – just cut back it down to the ground annually in the fall. It should be noted that not all species prefer full shade – the aforementioned water mints tend to tolerate only partial shade.

Mints are recognizable by their clumping growth pattern, square stems, and course veined leaves that have serrated edges. Harvesting the leaves and trimming it down regularly will promote new growth.

Growing mint has many other potential uses, but we’ll just list a few here. In addition to keeping mosquitoes away, it repels other insect pests such as ants and cockroaches, while pollinating insects like bees and butterflies are attracted to the flowers. The smell of peppermint (M. piperita) in particular is known to be unpleasant to rodents and can be helpful in clearing out a mouse problem. Mint is also known to have many medicinal uses. When brewed as a tea, it is supposed to have calming effects, while relieving headaches, cold symptoms, and digestive issues. It is also used topically to soothe and heal wounds – this may also relieve itchy mosquito bites. And, of course, it is edible and can be used in many ways in cooking to add mint flavor to recipes.

Lemon balm is a perennial herb also in the mint family, Lamiaceae, and it is very similar in appearance to other members of the mint family discussed above. Lemon balm is great to have around for the purpose of repelling unwanted insects and attracting beneficial insects due to the presence of several chemical compounds (terpin-4-ol, caryophyllene oxide, sabinene, beta-pinene, and trans-caryophyllene). This plant gives off a lemony, slightly minty scent which is supposed to keep mosquitos away, and in the summer, it blooms small white flowers that are very attractive to honeybees. In fact, its genus name “Melissa” means honey bee in Greek, and the oils are used by bee keepers to attract bees to new hives.

Lemon balm prefers cooler weather, thriving in zones 4-9, and it does well in shade, especially during the summer. Unlike mints specific to the Mentha genus, lemon balm does not spread aggressively through underground growth, but it is still recommended to trim down it a few times a season to keep too many seeds from germinating and to keep the plant looking healthy.

As an added bonus, lemon balm has many other practical uses. Leaves can be brewed to make an herbal tea, which can be used medicinally in many ways similar to mint. It is also used in cooking to add flavor.

Allium is a genus that include species such as garlic, onion, and chives, known for their strong smell and taste that is disliked by mosquitoes. In particular, Allium species contain the insecticidal and antifungal compounds allicin, Allyl disulfide, Diallyl disulfide, and Triallyl disulfide, with studies finding allium oils to be a potent and readily biodegradable (meaning less harmful to the environment) insect repellent against mosquitos in particular. Perhaps the most well-known and most widely used insect repellent in this group is garlic (Allium sativum).

Members of the Allium genus are perennial herbs that form true bulbs. Allium flowers are often globe-like and actually consist of a cluster of up to 100 individual florets. Some onion species are cultivated ornamentally and the flowers can come in a variety of showy colors!

While they prefer more sun, Alliums can tolerate partial shade, so a good location for planting might be along the edges of your shaded garden. Planting them in a location with morning sun and afternoon shade may work well for providing the plants with necessary sunlight while allowing you to enjoy them in the shade later in the day.

Some species are even more tolerant of shade than others, such as garlic chives (Allium tuberosum). Plant them in the fall to see them bloom in the spring, and they should return every year as a new bulb grows. As a general rule, the bulbs should be planted pretty deep down – about three times deeper than the bulb is wide. Depending on the species, Alliums can grow in hardiness zones 3-9. The most important care tip after planting is to make sure the soil drains well, because bulbs will rot if the soil is too damp.

Allium provides resistance to other insects such as ants and aphids, and is unattractive to mammals such as squirrels and deer, so they can also prevent your garden from being dug up and damaged.

Floss flower is an annual that is classified in the daisy family, Asteraceae.  This is a fun addition to a garden because of its fluffy pom-pom like appearance and vibrant coloration – the flowerheads are often a bright shade of blue or purple, and consist of a dense cluster of threadlike ray flowers.

Similar to others listed here, its scent attracts pollinators while keeping mosquitoes away. It contains a chemical called coumarin, which is found in some insecticides. In fact, studies have found that coumarin causes 100% mortality in mosquito larvae, and greatly repels adult mosquitoes. However, an important detail to note is this plant is toxic if ingested by humans, pets, or grazing animals, so place it with some caution!

Floss flower prefers some sun, but can be grown in partial shade, which is rather unique for an annual. It has the potential to grow as a perennial in zones 10-11. It makes a great container plant in the shade, or it can be planted as a border to a garden. It should be kept well-watered after planting, whether from seed or transplant, but once established it is actually drought tolerant.

Native to much of Africa

One who is researching mosquito-repelling plants is likely to come across citronella, which is known as “mosquito plant” and thus worth mentioning, but there is some confusing information out there. Citronella is a member of the geranium family, and is not to be confused with true citronella grass, which is in the genus Cymbopogon, along with lemongrass, and is not shade tolerant.

The ingredient citronella, which is often used in bug spray and scented candles, comes from true citronella grass. One study actually showed that the geranium Citronella was unfortunately not very effective at keeping mosquitoes at bay. Other sources, however, have found otherwise – hence the confusion! We say give it a shot and let us know if it worked for you!

Despite that evidence, if you want to grow it for its citronella-like scent and light pink blooms, mosquito plant is a partial shade plant, so it does best if it gets some direct sun for part of the day. Plant it in rich soil that is kept moist.  It will grow as an evergreen perennial in zones 9-11, but in regions that freeze over in the winter, will instead act as an annual. Alternatively, you can plant citronella grass but do note that this plant doesn’t do well in shade.