Belonging to Lamiaceae, the mint family, water mint or aquatic mint is a perennial flowering semiaquatic herb. Water mint, as it’s also called, is native to the majority of Europe as well as northern Africa and western Asia.

Over the last 200 years or so, it has become naturalized in North America (primarily in the Midwest, where it’s considered invasive in some areas), South America, and Australia due to being introduced as a popular and tasty herb for use in teas. It is not typically found in the most northern portions of Europe (Scandinavia) due to frigid, harsh winters, but can occasionally be found along coastlines in Finland where temperatures are slightly more moderate.

Water mint reproduces both via underground rhizomes as well as pollination by insects and birds. Mentha aquatica is considered a generalist species, as a wide variety of insects visit their flowers. Studies have found that water mint is excellent at filtering out pollutants as well as heavy metals such as nickel. In fact, it is currently used by environmental professionals to aid in phytoremediation efforts of wetlands and other natural waterways, meaning that watermint could also aid in improving soil and water quality around and in your pond 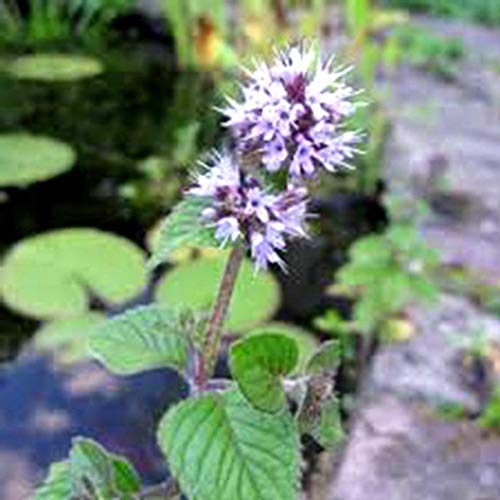 Mints are among the easiest plants to identify in the wild, even for novice botanists and plant hobbyists. Rather a rarity in the natural world, watermint, as well as just about everything else in the Lamiaceae family (including catnip), has square stems! In addition, every species in the mint family has opposite leaves and a four lobed ovary, meaning that each plant contains four ovules, or eggs, in separate chambers within the ovary. This can be observed by cutting open the ovary, which is found within the fused sepals beneath the flowerheads.

While not all plants with square stems and opposite leaves are in the mint family, if there is also a four lobed ovary and a distinct, mint-like smell, you can be quite certain that what you’ve come across is indeed a mint of some sort. To narrow down exactly which species within Lamiaceae you might have found, you can use this handy, interactive dichotomous key if you don’t have access to a physical identification book.

Mints of all kinds have been utilized medicinally for many hundreds of years. Today, common uses include applying to the temples or ingesting to alleviate headaches, eating the leaves or steeping them in a hot tea for gastrointestinal discomfort, utilizing the oils contained within the leaves for aromatherapy treatment of stress or respiratory issues, and crushing the leaves into a balm with other herbs to apply to sore muscles and joints. In addition, the compounds contained within aquatic mint, and most other mints, help to repel mice and various insects (such as mosquitos, black flies, and midges) as they upset the respiratory system in rodents and the olfactory system in insects.

A fairly hardy plant, water mint grows well in either full sun or partial shade and can survive in acidic, basic, or neutral pH soils, but prefers those within the neutral range of 6 to 7. Water mint grows well in both cool and warm climates, but will die if frosted and will need more shade if kept in temperatures that average above 75° F (~24° C).

They are known to grow anywhere from a foot to around three feet in height with as much as a one foot spread, including leaves and flowers. Maximum size is typically reached within three months. Flowering is relatively short-lived for mints growing in climate zones C and D, usually occurring for about a month during the peak of summer, but can occur year-round in climate zone A. If frosted out over the winter, water mint should resprout the following spring as it is a perennial.

How to Plant Water Mint In Ponds

First and foremost, water mint spreads via rhizomes. This means that it can spread far and fast, potentially taking over your existing plants, or worse, spreading into natural ecosystems and becoming disruptive. To prevent this, plant aquatic mint in pots or containers that will restrict its root spread. It can be planted in two to four inches of soil, or in emergent portions of your pond (or on pond shelves) with its roots in the substrate and two to four inches of water covering the stem.

They do well in either shallow marginal waters or damp soil. If planted in your pond, either soil or a substrate like sand or gravel will work just fine. Mints should be planted about five feet apart from each other to allow for maximum growth. In the wild, watermint can be found along rivers, streams, lake banks, ponds, and in wetlands – particularly bogs – as well as moist grasslands and woods.

How to Care For & Maintain Water Mint

Water mint doesn’t require much care. You can clip leaves to achieve a desired size and bushiness, although this isn’t necessary. If not planted in pots, you’ll need to regularly (about once per year) dig up the rhizomes and clip them to prevent further spread. This can be quite a hassle and damage or stress existing plants, so simply planting them in pots is best. Simply ensure that the soil they’re in is kept moist, and your water mint will be happy! As always, clean any dropped foliage out of your pond as needed.

How to Winter Water Mint:

There’s no need to bring them indoors for winter, as they’ll pop right back up the following spring. If you would like your mint to begin flowering and seeding sooner in the spring/summer, you can bring it indoors prior to the first frost and place it in a pot or hanging basket in a bright window. This way, the plant won’t have to completely resprout in the spring. Water it thoroughly every two or three days, and mist it gently daily between watering to keep the soil damp.

Water mint is invasive depending on where you live. For example, it’s considered native throughout Europe, non-native but non-invasive in the southern United States, and invasive in portions of the Midwest and western region of the United States. In Michigan, there are no plans to control water mint as it doesn’t seem to have overtaken or damaged ecosystems, but in Idaho it’s fully illegal to have any mentha aquatica on your property. As a result, you’ll need to do some research to figure out whether or not it’s legal for you to have water mint!

Water mint is only toxic in large quantities to humans, dogs, cats, and horses. It’s likely toxic to fish in large quantities, as well. Further research did not yield exact amounts, but if your fish or cat consume a couple of leaves they should be fine, as humans and some wildlife enjoy consuming small amounts of mint. The compound primarily responsible for this toxicity is pulegone, which damages the nervous system and liver. e.

Is Water Mint Edible? Will Fish Eat it?

Water mint is edible, but toxic in large quantities. However, your fish are unlikely to nibble on it due to its strong scent and taste – menthol tends to be unappealing to a variety of animals, including rodents and deer. However, to be on the safe side, only plant water mint on pond shelves that are too shallow for your fish to easily get to, and also plant them in pots both to deter herbivory and to prevent the rhizomes from spreading.

Water mint can be found in most plant nurseries, pond retailers, and online. A quick Google search yields a host of options. Click below to check prices!

Scroll back to top