Ichthyobodo, also known as costia, are flagellate protozoan parasites. They spread easily from one fish to another, and can result in diseases as well as a host of secondary infections and illnesses. Even a clean, well maintained pond can become plagued by costia via being introduced by newly acquired pond fish.

As such, it’s exceptionally important that you’re monitoring your fish and water quality daily. If any symptoms occur, you must act quickly to treat and eliminate the parasites before too much damage is done to your fish. 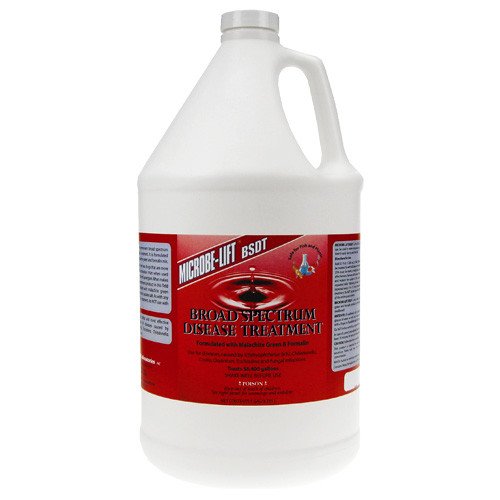 What Is Costia? Where Does It Come From?

Costia are incredibly small flagellate parasites, meaning that they have appendages to help them swim about and more easily find and latch onto hosts. At only 5 to 20 micrometers in size, they are smaller than the width of a human hair (about 50 micrometers), which makes them incredibly hard to detect and diagnose.

In nature, oftentimes they are introduced to ecosystems via fish restocking efforts. Trout, salmon, and other such game fish are often overstocked in fish farms, resulting in parasites like costia, infections, and disease being able to establish and spread easily among fish.

How to Identify Costia in Ponds, Koi & Goldfish

Their appearance can be described as a body that is distinctly bean-shaped, or closely resembling a comma. Depending on the life stage, two long, thin, hair-like flagella may be visible on the backside of the body. When not attached, they may appear to have more of a disc-like shape, and move about in a bumpy sort of twirling fashion as they use their flagella to navigate.

Most often, they’re introduced to garden and ornamental ponds via new fish. For this reason, any newly acquired fish should be quarantine and observed for any signs of illness for at least several days before adding them to your pond.

Due to their tiny size, the best way to identify costia is by using a microscope. Juvenile fish are the most likely to be affected by Ichthyobodo species due to their underdeveloped immune systems.

What Is The Life Cycle Of Costia?

Costia are actually single-celled organisms, and reproduce asexually via cell division. This means that their numbers can explode very quickly, as they do not require a mate – they simply split into two. They are able to parasitize fish almost immediately after division, so there is no larval or development stage.

Water temperatures between 50 and 77° F (10 to 25° C) result in the most rapid reproduction rate. This depends somewhat on species, but Ichthyobodo pyriformis and Ichthyobodo necator (the two primary species that are known to infect ornamental fishes) seem unable to reproduce when temperatures exceed 86° F (30° C). Below 46° F (8° C), costia will fall into a dormant cyst-like state on fish until waters warm up.

Division occurs over a span of about 10 to 12 hours. If they are unable to feed on a host for two hours or more, oftentimes these parasites will die, with most species certainly dying after 24 hours without feeding if temperatures are above 59° F (15° C). The lower the temperature, the more slowed costia become, thus increasing the amount of time they can go without feeding.

Ichthyobodo attach via a disk-like structure that cuts into the skin, and then extend microtubules into the fish’s cells that are able to harvest the cell’s contents. Multiple costia can attach to a single cell, and they are able to attach anywhere on the body.

What Are Symptoms of Costia In Koi?

Fish infected with costia may flash, flick, and scrape themselves against various surfaces to help alleviate discomfort from the parasites.

As with most parasitic infections, fish are likely to produce more epidermal mucous to try to fight off costia that have attached themselves. This mucous may be greyish blue in color.

Fish that suffer from costia that have attached themselves to the gills are likely to display respiratory distress, most notably labored breathing.

In the case of severe infestations, fish can become lethargic due to the extreme loss of energy and body resources.

Fish that are acutely infected may suffer from a depressed appetite, resulting in serious and noticeable weight loss.

If quite a few Ichthyobodo are parasitizing a fish, it may develop red sores and lesions. These invite in bacteria and viruses that lead to secondary illnesses and diseases.

Costia establishing themselves on or behind fins may result in fish clamping their fins close to their body in an effort to lessen discomfort from the parasites.

Since costia can be difficult to detect due to their minute size, sometimes an outbreak goes unnoticed. Occasionally, fish won’t have any obvious symptoms and pond owners will have no idea until fish begin to die for no apparent reason. The best way to be sure is to take water and skin/scale samples and assess them under a microscope.

For fish that have gill damage and/or difficulty breathing, salt baths are the safest option. This salt bath should last for 72 hours to be sure all costia are dead. To minimize stress to your fish, first start with a concentration of 3 grams per liter (.3%). After 12-24 hours, increase this another 3 grams up to .6%).

If your fish seem to be handling this alright and don’t appear stressed, increase again to a maximum of .9% after 48 hours. Fish should be eating normally again and shouldn’t display signs of discomfort like flashing or clamping fins. You can now slowly decrease salt levels by performing daily water changes of 25%.

Formalin is the most effective treatment option, as it is able to kill off most costia infestations in ponds and fish farms. However, it can be toxic and damaging to fish, and so must be dosed very carefully and used only in serious cases. It is sometimes sold as Proform C, which also contains malachite green.

Short term baths can be given at a dosage of 50 parts per million, or .5 milliliters per 10 gallons, for two hours. Formalin lowers dissolved oxygen levels, and as such water should be well oxygenated before and during treatment.

Praziquantel is a more gentle chemical, and will work to kill off less serious costia infestations before the parasites have had a chance to reproduce out of control.

Regardless of the treatment approach, fish should be quarantined during treatment so that any costia remaining in the pond will die without any available hosts. This will ensure that you won’t reintroduce your newly parasite-free fish into a pond that still has parasites.

The primary mode of preventing Ichthyobodo from entering your pond ecosystem is by quarantining any new fish for several days. If you have a microscope, use it to observe several water and skin samples to check for costia or any other parasites, bacteria, or viruses.

Make sure that your pond is well oxygenated and well filtered. Use a filter with activated carbon to naturally capture and neutralize costia as well as pollutants that can enable costia. Check water quality daily, and perform daily 10-15% or weekly 20-25% water changes. Adjust pH, KH, and temperature as needed. If not already present, incorporate a variety of submerged and emergent plants into your pond to help naturally filter and oxygenate water.

Be sure to also feed your fish a high quality diet of balanced pellets, supplemented as needed by bloodworms, shrimp, fruits, and veggies depending on what kinds of fish that you have. A solid, healthy diet will enable and encourage healthy immune system functioning, making your fish less susceptible to illnesses, infections, parasites, and diseases.