Anchor worms, also known as Lernaeas due to belonging to the Lernaea genus, are parasitic copepod crustaceans that prey on freshwater fishes and, sometimes, amphibians. While this genus contains fairly generalist species that can occupy a variety of aquatic habitats, they prefer still, stagnant waters.

The most common species that inhabits pond ecosystems is Lernaea cyprinacea, so named for its propensity for infecting cyprinid species including koi carp, wild carp, and goldfish.

While infrequent guests in ponds, anchor worms are able to infect even healthy pond systems and often result in a great deal of fish stress, as well as secondary infections and diseases. As a result, you should treat for anchor worms at the first sign of symptoms to protect your sensitive fish. 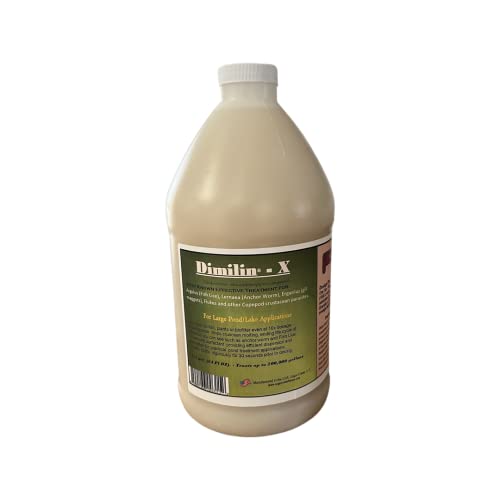 What Are Anchor Worms? Where Do They Come From?

As a crustacean, anchor worms are related to lobsters, crabs, and shrimp, though are significantly smaller. Though there are around 110 anchor worm species, Lernaea cyprinacea is, as mentioned above, the species you would need to be most concerned about as a pond owner.

It’s a temperature-sensitive species, able to exist in warmer climates and largely absent in regions that fall below about 73° F (23° C), seeming to only exist in freshwater ecosystems, and so are more of a threat in warm, freshwater ponds. If waters are below 57° F (14° C), females are unable to reproduce, with both males and females dying after a few days. Central Asia, South America, and temperate portions of the U.S. and Europe are where Lernaea cyprinacea are most typically found.

They’re about 6 to 11 millimeters long, with long, worm-like bodies (they’re shape changes throughout their lifespan, but this is the stage in which they’re most commonly found as it’s the most noticeable, occurring during adult parasitism of hosts).

Are Anchor Worms Dangerous? Does They Need Treatment?

They’re certainly dangerous to pond and lake fish, preying heavily on common carp, koi, goldfish, and some other fish species including salmon and mosquito fish, as well as salamanders.

A portion of their life cycle involves swimming appendages, which enable them to swim to hosts, where they chew and burrow into skin, create an anchor deep in tissue to hold them in place, and if allowed to stay on the fish will cause severe inflammation, ulcers, and hemorrhaging at the attachment site. Secondary infections and diseases often follow as the fish has open wounds and a compromised immune system from the anchor worms.

How to Identify Anchor Worms in Ponds & Lakes

An anchor worm’s head has four appendages, two of which are known as “anchors” that hold the worm in its host and the other two simply serving to cover its mouthparts when not feeding. For a visual, think of a worm version of the Demogorgon from Stranger Things (yikes!), but miniscule in size with four rather than five appendages.

In their larval stage, they’re most easily identified with a pond microscope by sampling pond water and fish tissue, while feeding adults can easily be seen with the naked eye. Larval anchor worms tend to attach to gills, presumably because they’re easier to attach to. In still water, adult anchor worms attach anywhere on a fish’s body, but in moving water they tend to prefer affixing themselves at the bases of fins, which protect them somewhat from water movement.

Originally, Lernaea cyprinacea was found only in central Asia, but has since spread due to the aquarium industry. The mass relocation and sale of fishes has enabled anchor worms to spread to a variety of hosts and ecosystems. As a result, any newly purchased fish should, as always, be quarantined from your pond and other fish for several days to check for any parasites, infections, or diseases that may be present.

What Is The Life Cycle Of Anchor Worms?

The life cycle of anchor worms is rather short, lasting typically a maximum of 25 days until adulthood is reached. Their total lifespan, however, can be longer – females can live up to five months, giving rise to as many as 250 juvenile anchor worms every two weeks.

Eggs hatch within around 24 to 36 hours of being released from the female, with larvae being non-parasitic and free-floating for about four days. Then, they go through their first molt, and find a host fish or amphibian. Over the next week or so, the anchor worm molts several more times while affixed to their host. Once their final stage is obtained, females remain attached to their host while males detach to mate with attached females.

After mating, the males die within 24 hours, while the females burrow deeply into fish tissue, either of the same fish or they find a new host, and “anchor” themselves in place, releasing eggs that then hatch a day or so later, beginning the cycle anew.

What Are Symptoms of Anchor Worms?

Fish will respond to parasites by automatically generating thicker skin and connective tissue in that area. The region around the anchor worm is likely to appear visibly swollen and red. This will result in the anchor worm trying to dig in deeper, thus further damaging tissues.

This symptom is typically only present in mosquito fish. Adult anchor worms tend to attach near fins if there is significant water movement, or their host is lively. Mosquito fish are active, and possess rather small gills, resulting in their gills being utterly destroyed if infected by anchor worms.

Fish being predated on by anchor worms are likely to be lethargic due to the loss of blood and energy expenditure involved in trying to fend off the parasite and heal wounds.

As covered in our koi flashing article, fish that have parasites or are otherwise uncomfortable or ill are likely to flash and jump about to try and alleviate pain and discomfort on their skin.

Fish may display difficulty in breathing if the anchor worms have attached on or near the gills. This is typically where juvenile anchor worms prefer to go.

Fish being fed on by anchor worms will have open wounds and weakened immune systems. As a result, it’s possible that they could contract fungal, bacterial, or viral infections that they would otherwise be able to fend off. Examples of secondary infections include ich and koi herpes virus.

Several studies have found that cyprinids (including koi carp) infected with anchor worms were anywhere from 4 to 71% lighter than koi without anchor worms.

The most obvious signs of an anchor worm infestation will be the visible presence of them on your fish. They will appear as small, often grey-white warmish creatures hanging off of your fish.

The quickest way to kill off anchor worms is to utilize chemical means. Dimilin (active ingredient: diflubenzuron) is able to kill anchor worms quite effectively, and can be found relatively easily both online and in pond/aquarium retail stores. It works by disrupting growth during molting, when the parasite is most vulnerable, and as such is able to kill both adults and juveniles.

Potassium permanganate works as well, and works by weakening the anchor worm and causing it to release its hold on its host, enabling you to be able to scoop them out of the water easily. A 10 to 15 minute formalin bath will also work, killing both adult and larval anchor worms no matter where they are on fish.

Crystal Clear Knockout Plus is an all-natural, plant based parasite treatment that is surprisingly potent. Customer reviews rave about its ability to kill off ich, anchor worms, and other ailments that standard over the counter treatments weren’t quite able to kick.

Salt baths can be effective as well, but may take longer than chemical means. Another option is to manually remove all parasites with tweezers, but this can be time consuming, and you may miss smaller juvenile anchor worms that are less visible.

The best way to prevent anchor worms is to quarantine any new fish that you obtain for several days, observe their behavior, and you can even take water samples as well as small skin samples to check under a microscope for parasites.

Maximizing water quality will also greatly reduce the likelihood of anchor worms settling in your pond, as they prefer still, stagnant waters. Polluted waters in particular are a haven for anchor worms and other parasites. If you don’t already have one, add an aerator to your pond to both keep water moving and increase dissolved oxygen levels.

Be sure to have at least one water filter, and you should remove any sticks, leaves, etc. from your pond on a daily basis. Use a water test kit to check water quality at the same time each day, and adjust the pH level, temperature, hardness, and so on as needed.

Give your fish high quality foods, making sure that they’re getting the right mix of proteins, fats, carbohydrates, and vitamins and minerals. A balanced food pellet supplemented with bloodworms, spirulina, and various fruits and veggies works well for most pond fish. Proper nutrition will keep your fish in good health and boost their immune systems, helping them to fend off parasites and secondary infections more easily.