Trumpet pitchers, also commonly called pitcher plants, are plants that are uniquely adapted to be carnivorous, feeding exclusively on insects. Their leaves have, over millions of years, become completely connate, meaning that they’ve fused together.

These fused leaves form a deep cup, or pitcher, shape that contains digestive enzymes and acids, as well as paralyzing compounds. The lip at the top of the plant is coated in a wax that is so slippery, most insects cannot escape once they’ve landed on the plant and slip right down into the pitcher. Digestion occurs over several hours.

Pitcher plants undergo photosynthesis more quickly than most other plants to help power their carnivorous metabolic processes, and as such they soak up a great deal of nitrogen, phosphorous, and even ammonium. This makes them quite useful at helping to filter wetlands and other waterways.

It addition, trumpet pitchers play a critical role in controlling insect populations in the habitats where pitcher plants are found, most notably flies, wasps, beetles, and ants. They’ve also formed symbiotic relationships with some organisms, most notably some ant, shrew, and bat species.

Some ants have very sticky legs, enabling them to feed on the plant’s nectar without falling in. The presence of these ants in turn draws in larger, more valuable prey, such as flies and spiders, which then fall into the pitcher plant. Various shrew and bat species are also able to enter the plant to obtain sweet nectar, and are large enough to easily escape. They in turn defecate in the plants, providing valuable nutrients that help the plant grow. Some pollen may also stick to their bodies. Pitcher plant flowers are also of importance to the bees that pollinate them. 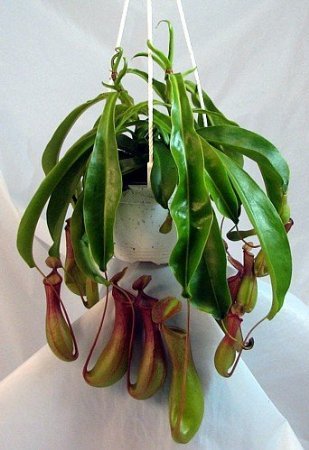 In most areas, trumpet pitchers really begin growing in May, typically reaching maximum size within two months, depending on the species. Most pitcher plants obtained from nurseries are Sarracenia purpurea (purple pitcher plant), which is the smallest of the North American trumpet pitchers, typically reaching less than a foot in height. However, some varieties, like Sarracenia leucophylla (crimson pitcher plant), reach closer to a meter in size. Be sure to do plenty of research before purchasing a pitcher plant, so that you know which variety you’re getting!

Blooming usually occurs from April through May, sometimes before the pitcher plants themselves even fully come out of the ground, and consists of very strange-looking but pretty flowers. These extend above the rest of the plant via a long, thin stem, with 3 to 10 centimeter-in-diameter flowers hanging over the plant or ground like an umbrella. Flowers can be white, yellow, red, purple, pink, or a mixture thereof, and are quite interesting to look at. Bees are the primary pollinators.

Most pitcher plant varieties do best in USDA hardiness zones 5 and above, but S. purpurea and S. flava (yellow pitcher plant) are able to tolerate conditions as low as hardiness zone 3. This makes sense considering both of these species can be found in the cooler regions of Canada and the northern U.S. Full sun suits these plants best, but they can tolerate some shade. In the winter, they’ll actually need much less light to allow them to go into proper dormancy to conserve energy for the following year’s blooming and growth.

How to Plant Trumpet Pitcher In Ponds

Pitcher plant roots are actually rhizomes, which makes it relatively easy to propagate these plants. If you already have pitcher plants, or know someone who does, you simply cut off some rhizome (ideally in the fall when the plant is entering dormancy, or in the spring as it exits it) and plant the pieces to obtain multiple pitcher plants.

Well-draining, low-nutrient soil like sandy loam or a 50-50 mix of peat and sand works well. Be sure to keep the pH on the acidic side, between 3 and 5. Alkaline soils will kill the plant, as they are specially adapted for acidic bog environments.

These are naturally bog plants, so they like to have their ankles dry and feet wet, meaning that the top layer of soil should not be saturated, while their roots are able to reach down into moist soil. The first two to four inches of soil should not be consistently saturated. Standing water usually causes them to rot and die, so plant them along the edges of ponds rather than in them.

How to Care For Trumpet Pitcher

Pitcher plants are able to obtain a great deal of nutrients from their prey, so adding fertilizer could actually be a detriment to them. Fertilizer can be added when first planted, if planting from seeds or rhizomes, to kick-start growth, but do not add any fertilizer after that.

One of the greatest mistakes that many people make is thinking that, because pitcher plants typically grow in wetland areas, that they need to be kept constantly wet. This is not the case! In the wild, pitcher plants usually are found around bogs. These are often quite wet during the spring and early summer, but then can become quite dry.

Pitcher plants are tolerant of temperature and moisture shifts, so long as they are not allowed to freeze or be completely saturated! Do your best to make sure the top two to four inches of soil are not wet, as constant damp (which mimic flooded conditions) will kill the plant.

As the season goes on, some parts of the trumpet pitcher may brown and die, like the flower, leaves, and pitcher itself. Prune these off as needed, so as to keep the rosette that sits on the ground healthy and in good condition to produce new growth. Do not prune the rosette itself at all. Though pitcher plants are not known to be toxic to any organisms, do keep any dropped or pruned foliage cleaned out of the pond to maintain healthy water quality.

How to Winter Trumpet Pitcher

Trumpet pitchers are typically pretty winter hardy, with their rhizomes simply entering into dormancy in late autumn and then rearing back up in the spring. You can dig them up prior to winter, if you’re concerned with having overly hard and extended periods of bitter cold and ice, though this shouldn’t be necessary. If you do dig them up, they’ll still need to be kept in a cool location, ideally below 50° F (10° C). Light should also be reduced, minimizing direct light as much as possible. Even total darkness will not harm them when dormant.

This reduction in temperature and light is what allows trumpet pitchers to enter proper dormancy. Without this dormant period through the winter, trumpet pitchers will expend too much energy and die. A basement, shed, or covered porch work fine. Also be sure to water them less, keeping the soil only slightly damp to dry. If you live in the UK and wish to keep pitcher plants outdoors during the winter, S. purpurea and S. flava do best.

Trumpet pitchers are not known to be toxic to humans or animals, including fish. Nevertheless, as always keep any dropped foliage cleaned from the pond to encourage healthy water quality.

Pitcher plants, as with any plant, are invasive outside of their native range. That means that those in the genus Sarracenia are native to North America, while Heliamphora are native to South America, and Nepenthaceae are native to Asia and Australia. There are no native pitcher plant species in Europe. As far as research shows, you can still obtain trumpet pitchers for gardens in the UK, but do take care to plant them in pots so that they don’t spread into natural areas and cause ecological damage.

Is Trumpet Pitcher Edible? Will Fish Eat it?

While trumpet pitchers are not toxic, they’re also not known to be particularly edible. Some pitcher plant species, like the yellow pitcher plant, have been used medicinally. The leaves and roots are dried, then ground up and used to treat dyspepsia, as well as liver and kidney issues. These claims are not medically backed up as far as we can find, so don’t try eating pitcher plants yourself! Fish are not known to try to eat pitcher plants.

Where to Buy Trumpet Pitcher & Seeds? (UK & US)

Pitcher plants are often available from plant nurseries, as well as online outlets. Most plant nurseries tend to stock the smaller varieties, usually S. purpurea and similarly small hybrids of this species. If you wish to have a different species, your best bet may be to order it online or request the nursery to special order it for you.