How to Raise & Care for Tadpoles from Eggs in Ponds [Updated]

Table of Contents show
1 How to Raise & Care for Tadpoles from Eggs in Ponds [Updated]
1.1 Amphibian Egg Survival in Ponds
1.2 What Do Eggs Look Like & When Can You Find Them?
1.3 Feeding and Protecting Tadpoles
1.4 Tadpole Developmental Timeline
1.5 Creating a Safe Exit
1.6 Losing a Few Tadpoles
1.7 How to Tell Amphibian Tadpoles Apart

There’s much to learn from the amphibian life cycle. The metamorphosis that these animals experience from infancy to adulthood is nothing short of wondrous. It’s a reminder of just how perfect the workings of nature are. If you’re one of the few that have witnessed the very moment tadpoles have hatched out of their eggs, count yourself lucky! You may have found yourself drawn to the hatchlings, envisioning the many challenges and wild adventures they will have to face in their journey to adulthood.

Pond polliwogs are not always the offspring of frogs and toads, they may be salamander and newt youngsters too. They come in many forms and sizes, grow at different rates, and may be selective about their food. The one thing that truly binds them, apart from their genetic similarities of course, is their dependence on their aquatic environment. Like fish, amphibian larvae are not yet equipped with adaptations that will allow them to breathe on land.

Both wildlife and ornamental ponds may be perfect sites for rearing tadpoles, and there are a handful of things you can do to increase the chances of their survival there. This article will take you through establishing a safe environment for them, from the moment they begin to develop in their eggs. Proper pond naturalization is key, after which tadpole care might be facilitated by the pond ecosystem itself.

Many pond owners who wish to raise tadpoles opt to remove eggs from the pond. They place them in a dedicated tank, prepared just for tadpole growth. While this does increase the chances of egg survival and successful hatching, it doesn’t mean the pond environment is less suitable. The pond is, after all, closer to their natural habitat in terms of conditions.

Here are some things you can do to foster a suitable environment for amphibian eggs. Many of the tips below also apply when keeping tadpoles in an artificial tank environment. Your goal should be to try to replicate the natural conditions of their pond without, of course, the predators! 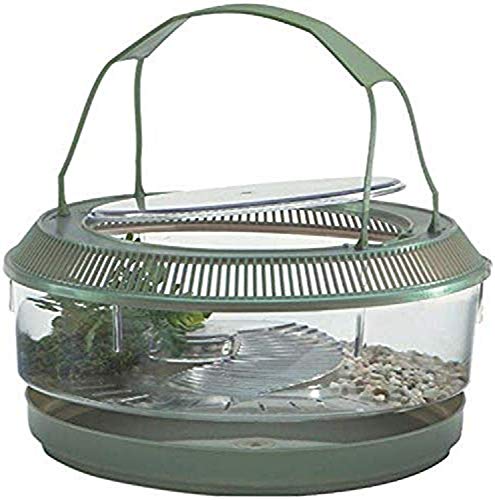 What Do Eggs Look Like & When Can You Find Them?

In their first week of development, amphibian eggs look a bit like clear tapioca pearls (i.e. circular and transparent). In the center of the egg lies a dark spot – this is the embryo. A thin layer of algae may permeate through or grow around the eggs, forming a symbiotic relationship with them.

Thousands of eggs can appear as huge clumps in the shallows, as is the case with frogs. They can also look like strings of pearls splayed out over vegetation, as is the case with toads. Salamander eggs tend to occur in columns, singly, or may have a protective film encasing the full egg mass.

The number of eggs can be overwhelming at first, but keep in mind that only a fraction will survive and hatch outdoors. Avoid spreading the eggs into other ponds as this may facilitate the transfer of parasites and diseases. Some eggs may also appear opaque instead of transparent. Chances are these eggs are unviable.

The best time to keep an eye out for amphibian eggs is early spring. They are most likely to appear in your pond in March, and possibly earlier if the weather allows it. Closer to April, they will begin to wriggle out of their eggs through a tiny hole. They may lie on top of their eggs, persisting on leftover yolk protein. If you notice that spawn hasn’t developed over the course of a week, there may be issues with environmental cues. It’s also possible that the eggs were simply bad to begin with.

Amphibian hatchlings should have no trouble finding food in outdoor ponds. During the first few days of separation from their eggs, they feed on floating algae, plankton, thin mats of microscopic bacteria, and plant matter. Their small mouths and guts aren’t able to take up other types of food yet, so it would be wise to lay off on feeding them.

The tadpole diet can quickly change as they grow, depending on the availability of food in your pond. Wildlife ponds are unlikely to have a shortage of food. The same goes for fully naturalized ornamental ponds. It may seem counterintuitive to not feed hatchlings. Try to find comfort in the idea that they are more likely to survive in the wild as adults if they begin relying on their own juvenile instincts for food.

In case you’ve decided to transfer the tadpoles to a tank, you will have to initially supplement their diet with pond plants, like hornwort or duckweed. You may then slowly introduce boiled carbohydrates and proteins. Consult this article for more information on feeding tadpoles in tanks.

At this stage, it may be wise to install some form of protection for your hatchlings, especially if your pond is full of fish. You can place more emergent pond plants in the areas that tadpoles are likely to explore. Larger fish and hungry pond visitors will struggle to find their way through the maze of shoots.

The full growth process from amphibian egg to young adult (“froglets” in the case of frogs) can take 3 – 4 months. Maturation time depends on food availability, pond conditions, and the amphibian species. Some can take as little as 6 weeks to mature, whereas others (such as the North American bullfrog) take months to years.

You can expect hatchlings to develop a longer tail and visible gills during the first 2 – 3 weeks. Young tadpoles have the tendency to feed on ‘neuston’, which are planktonic algae that float just beneath the water’s surface. Hungry tadpoles will benefit from duckweed and frogbit colonies, under which they can easily conceal themselves from predators. If you can’t shake the need to feed them, you can drop a few bits of boiled lettuce among the floating fronds.

Depending on the species, external gills will begin to disappear or increase in size as the tadpole grows. This coincides with the development of hind limbs. Limbed tadpoles will be more adventurous, rising to the surface more frequently to breathe and feed. Some species must be able to breathe air to ensure that their lungs develop normally. At this point, they are likely to benefit from any leftover fish food, insect larvae, and cadavers of small animals in the pond. They become omnivorous, with an increasing need for protein, due to the demands of organ and muscle development.

As front limbs develop in the 2nd to 3rd month of life, their tails gradually become resorbed by their bodies. If protein-rich food is scarce, limbed tadpoles may begin cannibalizing on one another. Again, if your wildlife or ornamental pond is fully naturalized, tadpoles should have no issues finding appropriate food. If you’re concerned about food availability, you can provide them with fish flakes, bloodworms, or red mosquito larvae.

At the end of the 3rd month, your tadpoles will begin to look more like tiny adult frogs. These are almost ready for a terrestrial lifestyle as their lungs and skin are fully developed. Froglets will require areas where they can rest as they learn to breathe more atmospheric air. Floating logs and leaf pads are perfect for a few minutes of sunshine, exercise, and rest above the water’s surface.

Once they are confident in their lungs and limbs, their instincts to venture outside of the pond take hold. A section of your pond’s perimeter will have to be transformed into a safe exit point for the young amphibians.

Wildlife ponds tend to have naturally sloping sides that make it easy for small animals to move in and out of the pond. If your pond’s margins are steep, you can use stones and trailing semi-aquatic plants to create a more levelled depth gradient.

Caring for young frogs doesn’t end there. The environment outside of the pond can be dangerous for them. They will need naturalized corridors (think plants, piles of leaves, hollow logs) that can safely shelter them and provide food as they explore the terrestrial world. While you can never ensure that all youngsters will make it, you can definitely increase their chances. Avoid using chemicals and mowing grass close to the pond while froglets are present in large numbers.

The wilderness is a harsh world, especially for young animals. This is why breeding frogs produce eggs in the thousands. Many will undoubtedly fall prey to larger animals or fail to find food due to competition in a confined space.

This is all part of survival in a natural ecosystem. You’re bound to lose many tadpoles, but rest easy knowing those that survive are likely the strongest of their bunch. Survivors are better equipped to make it in the wild, find a suitable mate, and continue their cycle of life.

How to Tell Amphibian Tadpoles Apart

While raising tadpoles in your pond, you might find yourself wondering how they’ll look like as adults. Though their pond requirements are mostly similar, it won’t hurt to find out which amphibians they will mature into. This section enumerates some of the key traits to watch out for while trying to distinguish tadpole types in the field. For identification to species level, you will have to consult guides that are specific to your area (e.g. Key to Tadpoles in US and Canada, Guide to Amphibian Larvae of Indiana).