Ever woken up to the tune of frogs singing in your garden? These nocturnal creatures are the rock stars of the amphibian world and are actually quite selective when searching for shelter. If you’ve come across these skilled jumpers in your own home, you may have been fraught with a series of emotions. People tend to respond to frogs based on what they know and the myths they’ve heard growing up. The last thing you should be, however, is frightened or grossed out.

Frogs are fascinating animals with complex life histories and increasingly fragile populations. These slimy, water-loving creatures can live for up to 14 years in a safe environment. There are more than 5,000 species of frogs, but a considerable number of them are in decline due to habitat loss and degradation. Symbolic of transformation, prosperity, and fertility, frogs deserve to be respected for their role in nature.

If you see one in your garden, you should pat yourself on the back instead of shooing it away! You’ll be surprised by the ecosystem services a resident frog may provide. Though there are exceptional cases where a “ribbit!” might be a bad thing, odds are that that frog you just saw means well. Listed below are some pros and cons to having frogs in your garden, along with tips and tricks to attract them. 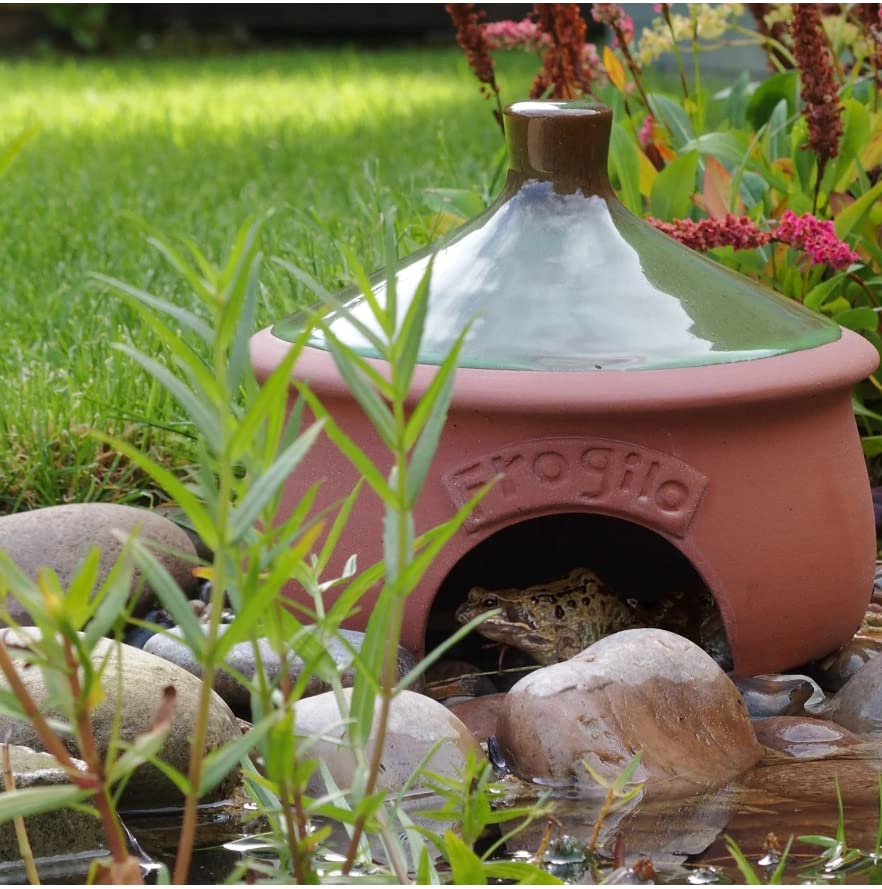 Benefits of Having Frogs

Frogs are quite an efficient form of natural pest control. They can save you from having to use pesticides in your fruit or vegetable garden. Skilled at using their tongues to catch even flying prey, frogs subsist on a diet of mosquitoes, flies, cockroaches, caterpillars, beetles, spiders, slugs, and more. Since we regard many of these insects as pests, frogs do us a tremendous service by getting rid of them before they can attack our precious plants or spread harmful diseases.

Frogs can eat an enormous number of insects in one night. Their tongues can move so fast, almost at the rate of a tenth of a second, that many forms of prey have no chance of escape. If you have a garden light that attracts insects at night, you may just get to see your resident frog in action.

Seasoned gardeners know that a frog in their garden is usually a sign of a healthy ecosystem. Frogs are highly sensitive to pollutants and sources of toxins, such as pesticides and fungicides. If your garden is prosperous enough without the need for these artificial additives, it is highly likely that it will be deemed suitable by a host of amphibians.

Do keep in mind that frog populations naturally fluctuate throughout the year. It’s normal to not see any of them for long periods of time, especially when environmental conditions hit extremes. They usually appear in larger groups during spring or when the weather is suitable. Mild temperatures and frequent rains can draw in more frogs, whereas dry summers may force them to search for shelter elsewhere.

Allowing frogs to thrive in your garden means you get to take part in amphibian conservation. Climate change and anthropogenic disturbances have forced many amphibian populations to the brink of extinction. Though many of our garden frogs belong to groups that are not necessarily threatened, they need our gardens to survive in increasingly urbanized zones. Habitat fragmentation forces them to venture into human settlements as they migrate to more suitable areas to breed.

If a pair of frogs select your garden or pond as a place to mate and lay eggs, you ought to be proud about maintaining a safe space where nature can do its work. You are simply doing your part in ensuring that another generation of frogs is given a chance to survive and perform its role in nature.

Have you ever felt a little lonely or under the weather in your garden? A bright-eyed frog can make you snap right out of it. These amusing creatures sometimes appear right when you least expect them! Moreover, having a garden frog is a great way for kids to learn about amphibians and to introduce them to the concept of life cycles that differ from ours. Under adult supervision, kids can learn so much from observing tadpoles and young frogs.

Possible Disadvantages of Having Frogs

1) Frogs may be poisonous

Some species of frogs, especially those that are very colorful (e.g. poison dart frog, corroboree frog, variable poison frog), are extremely deadly. These frogs produce toxins that are strong enough to kill humans. They derive most of the compounds to produce these toxins from a diet of insects and arthropods. Luckily, poisonous frogs seldom venture outside of their natural habitats. These jewel-like species are rarely found in developed areas and are usually restricted to the pristine rainforests of South America, Central America, and Africa.

Another common misconception about frogs is that they can give you warts. This is simply untrue and is based on an age-old myth that has to do with the wart-like texture of some frogs. In fact, warts are brought about by the HPV virus, which is spread by humans. All things considered, you should refrain from handling frogs. Being trapped in a grip can be terrifying for frogs and can ultimately result in their being injured.

2) They may be unsafe around pets

Some frogs can secrete toxins as a defense mechanism. Pets, especially dogs, may be the target of these secretions. If you have pets that like to hunt for animals, it may be best to keep a close watch on them as they roam around your garden. Though not necessarily deadly, frog secretions can irritate your pet’s mouth or digestive tract. If unfavorable symptoms occur, take your pet to a vet as soon as possible.

3) Frogs can carry diseases or bacteria

Depending on where they’re coming from, frogs can carry a host of pathogens that may affect your local ecosystem. In urbanized areas, they are known for being vectors of Salmonella. Direct or indirect contact with frogs, their droppings, or infected waters can spread the disease. Symptoms of salmonellosis include digestive system discomfort and can be severe in persons with compromised immunity.

To prevent the spread of diseases and bacteria, always make sure you wash your hands after a visit to your garden or after handling live animals.

How to Attract Frogs to Your Garden?

If you are able to keep a close eye on your pets and you live relatively close to nature, the benefits of having garden frogs far outweigh the disadvantages. Remember that frogs will always favor ecosystems that are well-balanced and healthy. To attract frogs to your garden, flush out any chemicals that may be present and avoid using pesticides. Provide visiting frogs with ample cover, such as plants, leaf litter, and other structures that offer shade and shelter.

A wildlife pond or water feature in your garden is the best way of ensuring the longevity of your resident frog communities. Frogs require moisture to respire properly. They also require a clean body of water to breed. Their strictly aquatic young need an abundant supply of nutrient-rich water to survive into adulthood.

As an added bonus, water features can attract many aquatic insects that may serve as prey for your visiting frogs. If you’d like to attract even more insects, one or two garden lights are a great way to ensure that a wide variety of bugs visit your garden each night! They’ll surely keep your frogs occupied and happy.