There are over 2000 known species of mealybug worldwide, a majority of which are invasive and are critical economic pests on crops like grapes, papayas, cocoa, and pineapples. Mealybugs are herbivores and can be monophagous or polyphagous. The former implies that a species specializes in a single plant, and the latter type can use multiple plant species as a host. Polyphagous mealybugs are the most common type of mealybug garden pest.

Not only do mealybugs cause feeding damage, but they can also transmit diseases that exacerbate their impact on these industries. In home gardens, mealybugs can quickly infest and overwhelm plants. Once established, they are tough to eradicate because they secrete a waxy coating that protects them from insecticides and predators. Once mealybugs are established, home gardeners can use three primary methods to control mealybugs. These are chemical control, mechanical control, and biological control.

Chemical control is the most used method and involves the use of insecticides which often have non-target impacts on natural enemy populations. Mechanical control refers to the removal of individual mealybugs or the complete removal of infected plants. This method works best if there are few insects or a localized infestation. Biological control is the reduction of a pest species via natural enemies. These can be generalist predators like lacewing larvae, lady beetles, and mealy bug destroyers or parasitoid wasps targeting specific pest species. These insects are attracted to gardens with preferred plant species.

A final option for homeowners is to grow plants that will repel pests and attract beneficial insects. This guide will describe 11 plants that any homeowner can grow in their garden to deter a mealybug infestation. 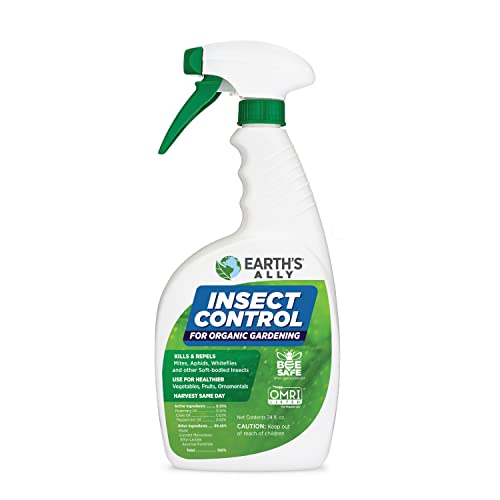 Several species on this list belong to the mint family, Lamiaceae, and a handful are known to be toxic to insects and can act as pest repellents. This diverse group of plants contains over 7000 species, many of which are widely used by humans as aromatic spices. Thyme is no exception.

Thyme is a perennial old-world herb from Eurasia that is prized for its aroma and culinary uses. Ancient cultures used it as incense for its supposed “purifying” properties. Additionally, evidence suggests that oil derived from thyme possesses some antibacterial and antiseptic properties. In World War One, for example, oils extracted from thyme leaves were used as a disinfectant in wound dressings and as an expectorant for mustard gas victims. Culinarily, thyme is a versatile herb used to season seafood, beef, chicken, and more!

From the perspective of pest control, powdered thyme is an effective repellent for grain storage pests. It possesses compounds like thymol and carvacrol, both belonging to the class of organic compounds called phenolic monoterpenes. These compounds have known antifungal, antibacterial, and insecticidal properties, which is why many pests, mealybugs included, tend to avoid them. Finally, some anecdotal evidence suggests that it doubles as an attractant for lady beetles.

Most hardware and garden stores carry this popular herb. It can also be grown from seeds or propagules. Full sun, plenty of heat, and well-drained soils are requirements for this plant. Soils should have a pH of between 6.0 and 8.0. Otherwise, it is drought-tolerant and, once established, it needs very little care. It also makes for a great container plant. While not regulated as an invasive weed, successful thyme plants may breach your garden’s borders and spread into your lawn.

Oregano is another popular mint species with a longstanding history with human cultures. For example, ancient Egyptians used it as an antidote and preservative. At the same time, the herb had many medical applications for the Greeks. Like thyme, it contains thymol, carvacrol, and a suite of other organic compounds with known health benefits. Additionally, it has shown some antibacterial properties. Oregano is great in chicken, pasta, and vegetable recipes. It has many uses in the kitchen, even as an herbal tea. Some studies have shown that oregano oils effectively repel insects like bed bugs, flour beetles, and garden pests.

The green leaves on oregano plants are small and mature plants will develop woody stems, eventually producing clusters of purple and white flowers. Young oregano plants should be spaced 8 to 10 inches (20 to 25 cm) apart in well-drained, nutrient-rich soil. Full sun is a must for this plant; however, if the weather is sweltering, it appreciates shade during the hottest parts of the day. Like thyme, it can be grown from seed or propagated via a cutting.

3) Lavender (Lavandula angustifolia and other species)

Lavender is a popular perennial herb used in teas, sweets, and as an aromatic for its calming effects and pleasant smell. This beautiful plant has charming purple flowers and a bushy growth habit. It was first discovered in the Mediterranean, where it spread with humans and was prized as a garden herb and traditional medicinal plant. Traditionally, ancient cultures used lavender to scent rooms, perfumes, and baths. It also shares the same antimicrobial compounds found in other members of the mint family.

There are many lavender species; those that have been studied and demonstrate mealy bug repellency or toxicity are Lavandula angustifolia and Lavandula luisieri. However, many species may possess the same compounds. Interestingly, plants in the genus Lavandula contain compounds that mimic mealybug mating pheromones, disrupting their ability to find mates and reproduce.

Growing lavender in the home garden is easy if it is provided with full sun and well-drained soil. This herb does not need a lot of water or fertilizer, although it does enjoy slightly alkaline soils. If kept healthy, it will produce small purple flowers in the summer and can be harvested year-round.

Sometimes affectionately called the “royal herb” or the “king of herbs,” basil is an herb with an ancient relationship with humans. It is a beloved spice from Asia cultivated and traded for centuries. Humans have bred varieties of basil to cater to diverse tastes, and basil makes a great addition to many dishes, including pizza, seafood, vegetables, and soups. Basil can also be an effective insect repellent against mealybugs and other garden pests. Organic compounds in basil, such as linalool and eugenol, can act as insecticides and repellents. Sweet basil (Ocimum basilicum), for example, was proven effective at repelling ticks, and its oil is an effective insecticide against vine mealybugs. When used in intercropping trials, tropical basil (Ocimum gratissimum) reduced pest damage in cabbage plots.

Thankfully, this royal herb can be found year-round in nurseries and garden sections of grocery stores, and keeping it healthy is relatively easy. Basil enjoys warm weather with highs between 79° and 90° F (26° and 32° F), and it does well in containers, raised garden beds, or classic in-ground gardens. Spacing varies by cultivar, but 13 to 18 inches (33 to 46 cm) is generally recommended. Soils should have a slightly acidic to neutral pH and be rich and well-drained.

Allium contains many species that share an ancient culinary partnership with humans. From onions, scallions, shallots, leeks, and yes, even garlic, this group of plants is consumed by many humans daily. In ancient history, garlic was used as a medicinal herb and a spice for thousands of years. Garlic is native to Middle Asia. The first cultures to cultivate it include the Ancient Egyptians, the Babylonians, the Indians, and the Chinese. However, there is a multitude of other ancient cultures that readily used this crop. Before modern science, human cultures cherished its therapeutic and curative properties. Ancient humans used garlic in many old remedies for conditions such as upset stomachs, rheumatism, and killing parasites. In the modern day, it has known proven medical applications. It can help reduce high blood pressure, elevated cholesterol, and issues associated with some arterial diseases.

Garlic grows best when planted in the fall and is extremely easy to obtain. Garden and hardware stores commonly carry this plant as bulbs that gardeners can directly sow into the ground. Additionally, gardeners can plant garlic bought as produce from the grocery store in gardens. It prefers soil with a pH of 6.0 to 7.0, and frequent weeding is a must!

Lantana is an unassuming shrub with beautiful multi-colored clusters of flowers. It is very aromatic and smells like lemongrass. The species L. camara is native to Central and South America. There is also a suite of North American native species. Lantana camara is invasive in the United States and hybridizes readily with native Lantana spp. Suppose non-native species are planted in the home garden; in that case, homeowners should minimize the risk of unintentionally spreading the Central and South American variety to non-native habitats. Lantana does not have the same reputation as a medicinal plant, nor does it have an extensive ancient relationship with humans. However, it is known to repel common pests, increase insect mortality in stored grain, and prevent feeding. In addition to these positive qualities, it attracts many pollinators and beneficial insects to the garden.

This plant enjoys full sun and can grow wider than many other plants on this list, growing bushes that can be up to or not more than 4 feet (1.2 meters) wide. The plants are perennial and come back each year, but the leaves fall off during the winter, and the stems become brittle. Home gardeners can trim back their plants to around 6 to 12 inches (15 to 30 cm) to encourage better growth in the next season.

Not to be confused with star anise (Illicium verum), anise or aniseed is another herb with an ancient human association. This annual spice is native to the eastern Mediterranean, particularly Egypt, where it was first cultivated. The valuable part of the plant is the dried fruit, harvested for use as a fragrance, an ingredient in alcoholic beverages, and a spice for popular Italian and German dishes.

Some sources suggest that it can help alleviate minor gastrointestinal distress and coughing, and can be used as a diuretic. In addition to the aforementioned medical applications, anise is also a vital pollinator plant and will attract various insects to the home garden. Regarding anise’s efficacy as a mealybug repellent, in a laboratory experiment, anise oils repelled mealybugs and, if eggs were already present, were one of the most effective oils at preventing those eggs from hatching. Anise compounds also possess some insecticidal properties.

This spice is easy to grow and can be planted in containers or within in-ground gardens. Aniseed prefers soil with a pH of 6.3 to 7.0. It is a relatively hardy plant that can tolerate underwatering once it is well established. However, anise stems may not be able to support the weight of the foliage above them and may require some staking.