List of Aquatic Pond Insects in Garden Ponds 2022 (With Pictures)

Aquatic insects are an essential part of a balanced water ecosystem, and the ones that are present can tell you a great deal about your pond and how healthy or unhealthy it is. For example, dragonflies are sensitive to pollution and therefore tend to be found in areas with good water quality, while leeches and mosquitoes are pollution tolerant, meaning that if they’re around, there’s a chance that your water needs some TLC.

Biologists often catch aquatic insects in water to deduce how healthy that area is, while of course performing other tests such as measuring oxygen and nutrient levels. This makes them exceptionally useful bio-indicators in freshwater ecosystems.

In addition to indicating water quality, aquatic insects also perform a variety of functions for your pond. Some will feed on other insects (for example, dragonfly nymphs have been known to eat mosquito adults and larvae); others consume algae and parasites; most can provide food for your fish, turtles, frogs, and so on; and some, such as caddisflies, help break down dead and decaying matter that might otherwise build up.

While insects are often viewed as somehow undesirable, gross, or frightening, the reality is that there are millions of species of them, and their place toward the bottom of the food web means that they are relied on heavily by everything else – even us! Insects enable life as we know it, and are just as important in your pond as they are anywhere else. Here, we will cover insects that are found directly in freshwater ponds as well as those that live around ponds but are not necessarily in the water. 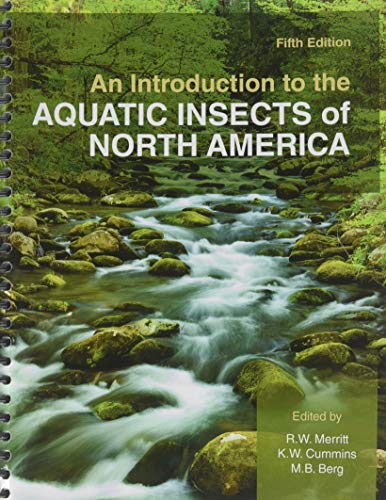 What Water Insects Can You Find in Ponds?

Mayflies begin their life cycles in water, where the mother lays her eggs on the surface and they either sink to the bottom or attach to some sort of relatively still surface, like a plant leaf, a log, or a rock. The eggs hatch after about two weeks, and both the larvae and nymphs are both found in water, where they spend up to a year of their life as they mature, feeding primarily on detritus and algae, but occasionally they will eat other small aquatic insects. The following spring or summer, in the course of about 24 hours they will leave the water, molt into adults, fly about in a horde, mate, lay eggs in the water, and die. This sudden event often results in mass carpets of mayflies, which may need to be removed from your pond if it’s too much for your fish to consume.

Like mayflies (and any other species on this list that includes “larvae” in the title), dragonflies begin their lives directly in the water as eggs that then hatch into larvae and develop further into nymphs. The adults don’t live in the water itself, but are always found near freshwater, typically slow-moving sources such as ponds near where they were initially born and will often land on the water’s surface to get a drink or hunt for small prey.

Interestingly, both the nymphs and the adults have almost 360 degree vision, which makes them excellent predators – they often feed on other insects, small mollusks and crustaceans, and occasionally very small fish fry (this shouldn’t be much of a concern for you, though, as they don’t prey on fish much and most aren’t large enough to be able to consume any fish at all). The nymphs stick toward the pond bottoms, where they are able to blend in, and abdominal gills enable them to obtain oxygen from the water (these gills are then, of course, lost once they enter the adult stage).

Stoneflies are of the species that are intolerant of pollution, so having them in your pond is a good sign! In fact, they require between 8 and 10 parts per million (ppm) of dissolved oxygen. It’s possible for them to spend several years underwater as larvae or nymphs before they emerge as adults. Like mayflies, the adults have an incredibly short lifespan – about a day or two, just long enough to mate and lay eggs. The nymphs have gills in their armpits that enable them to stay submerged, and are typically less than an inch in size, making them palatable for many fish.

Water striders, often nicknamed “skater bugs” because of the way that they appear to skate atop the water’s surface, can be found all around the world. They spend their entire lives in the water, both as nymphs and as adults. Their skin contains tiny specialized holes called spiracles that enable them to absorb oxygen directly into their bodies without lungs or gills. They look quite mosquito-like, but don’t bite or otherwise cause harm – they just skim about on the water’s surface, feeding on living and dead insects as well as algae. They make a tasty treat for just about any fish, but their long legs are hypersensitive and are able to pick up on slight vibrations, making them a bit of a challenge to catch.

Like stoneflies, damselflies are also incredibly sensitive to pollution and thus are used to monitor water quality. They’ll spend their larval and nymph stage in the water, and their adult stage flying and living near the water. The adults look quite similar to dragonflies as they also have a double set of membranous wings, but while a dragonfly’s back wings are larger than its front wings, the wings of a damselfly are all approximately the same size. They often prey on other insects, and both nymphs and adults may be eaten by fish.

Of all the insects on this list, water bugs may be the ones that you want the least. They can grow quite large (some have reached upwards of half a foot in length, though 3 to 4 inches is more common for an adult that’s been around for a couple of years), and they’re predatory. They have armored bodies and a long, very strong “beak” that is able to easily pierce other insects as well as fish, and humans if we get too close or happen to step on them. It’s quite a painful bite, too, as they inject toxic saliva into their victim that can immobilize prey that’s on the smaller side, though they won’t hesitate to attack and consume things that are up to 8 times their own size.

Typically, they stay in the water where they’re fast swimmers despite their large size, but during mating season will fly from pond to pond in search of a mate and to lay eggs. They’re hardy and can fairly easily overwinter so long as the water doesn’t freeze solid, meaning that they’re able to live for many years, continuously growing. Younger, smaller water bugs can sometimes be eaten by some fish, but you should still try to remove them from your pond to prevent them from growing too large and potentially harming pond residents. They’re also pollution tolerant, and while this doesn’t necessarily mean that your water quality is poor if they’re around, it does warrant a quick water test.

Water boatmen are fairly small, usually about 5 to 15 millimeters long, and have four unique paddle-like back legs, two on either side of their body, and two normal front legs. These paddled legs help to propel them along beneath the water’s surface, where they spend their entire lives. From time to time they’ll come to the surface for air, then dive back down carrying a small air bubble with them that allows them to stay submerged for extended periods of time.

They are typically non-predatory, meaning that they mostly feed on algae and detritus, but they have been known to eat mosquito larvae. They may also feed on plants, injecting the plant with enzymes that help break it down so the water boatman can then simply suck it up. Unless you have a lot of water boatmen, they don’t usually cause excess damage to plants.

Caddisflies are another species that is often used to measure water quality, as they’re not able to survive in water that has below about 7 ppm of oxygen or is polluted. Caddisfly larvae and nymphs can be easily identified by turning over rocks – if you find case-like structures (about a centimeter or less in length) on the rocks that are composed of tiny bits of substrate, grains, plant matter, and pebbles, there’s very likely a tiny caddisfly larvae inside. They build these tubes both to protect themselves and to help catch food in slowly moving water.

Some caddisfly species will use plant matter and other available resources to build a small net-like structure to catch algae and small invertebrates that happen into the net, much like a spider’s web. They characteristically spend a year or less as larvae and nymphs before morphing into adults, where they, like mayflies, fly out of the water and mate within a day or two, lay eggs in the water, and die.

These little guys look quite similar to water boatmen and also possess the paddle-like hair covered legs, but they swim on their backs and this is the easiest way to distinguish the two species. They’re not considered harmful, and can overall be seen as a functioning and normal part of your pond’s ecosystem. Unlike water boatmen, backswimmers tend to be predatory and feed primarily on other insects, with the nymphs sometimes even being cannibalistic (though this may help keep the population at bay and encourage survival of the fittest).