Do Koi Eat Other Pond Fish? What Fish NOT to Stock with Koi (Updated)

Koi are the domesticated descendants of the common carp, which are naturally rather calm and easily tamed. As a result of this as well as centuries of domestication, koi are customarily gentle giants that get along well with each other and many other creatures as well, so long as their dietary needs and water quality requirements are met.

However, they are opportunistic omnivores, and are known to eat smaller fish species as well as fry if they have the opportunity. In fact, they’ll even eat their own fry! Females lay thousands of eggs, and leading up to the time that these hatch they will often nibble on them. In some cases, such as when pond is overstocked or there is too little food, koi siblings may eat each other for sustenance as well as to reduce competition. However, these instances aren’t common and so long as you keep your koi healthy and with appropriate pond mates, all of your pond’s residents should live strong, happy lives!

Make sure to feed your koi a balanced diet and keep your pond within the necessary parameters – water temperature should be between 59 and 77 degrees Fahrenheit (15 to 25° C), with a pH range of 7.5 to 8 and dissolved oxygen at or above 7 parts per million. Below, we’ll cover the main fish species that shouldn’t be kept with koi, as well as ways to help prevent the predation of smaller fish. 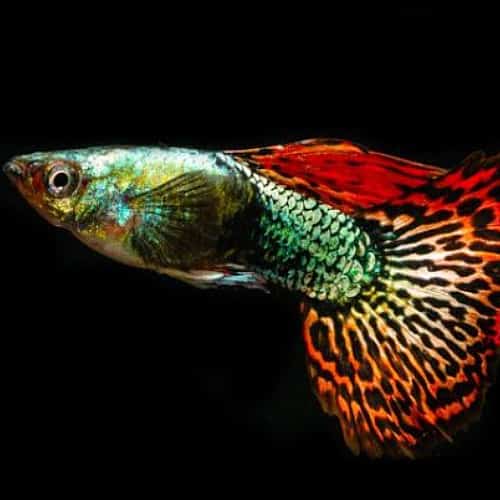 At only 2.5 inches long at their maximum adult size, guppies are quite small fish that are easy prey for koi. Despite their size, they’re hardy little fish able to withstand temperature fluctuations outside of their 55 to 86° F (13 to 30° C) range, though pH should be kept fairly alkaline between 7 and 8. In addition, guppies will eat algae as well as mosquito larvae, making them ideal pond fish, particularly for beginning ponders, but not with koi.

While there are many different subspecies of minnows, fathead minnows are the most widely kept variety and so that’s the subspecies that we’ll focus on here. Fatheads, also known as the common minnow, grow to a maximum size of 3 inches or less and are typically a dusky-grey color with a lighter, often silvery underbelly and a brown-black stripe running horizontally along their side.

They do well in cooler waters ranging from 53 to 68° F (12 to 20° C) with a pH between approximately 7-7.5, though they’re one of the toughest pond fish species and can withstand fluctuations in both of these as well as illness, low dissolved oxygen, and turbidity so long as none of these conditions lasts for an extended period.

With several varieties available, danios can range in size from only an inch in most species to the largest, giant danios, growing up to 5 inches in length – still small enough to tempt some koi. Though also relatively hardy, pH should be kept between 7.0 and 7.8 and temperature between 70° and 78° F (21-25.5° C). Their overall appearance depends on the variety – for example, zebra danios are brown and white with horizontal grey-black horizontal striping all along their bodies, while celestial pearl danios are quite vibrant with bright red-orange fins and underbelly with a black body and small yellow spots.

While standard common goldfish are usually alright to keep with koi, fancy goldfish, particularly the smaller varieties, should not be kept with koi. This is because they tend to be much slower than common goldfish, and as such are easy targets for koi. Even if the koi don’t eat them, the unhurried nature of fancies means that they’ll have a hard time getting enough food before koi and any other speedier fish eat it all.

The well-known Aggression of Koi Experiment explores what happens when koi and several popular fancy goldfish varieties are kept together. If you choose to have fancy goldfish (separate from koi, of course), their temperature preference is 65 to 75° F (about 18-24° F) and pH should be kept somewhere between 6 and 8, keeping in mind that different varieties will have slightly different needs.

As with most of the fish in this article, mollies come in a wide assortment of varieties (39 species, in fact!), with each having different needs and appearances. As such, if you wish to have mollies you should conduct research on the specific type that you would like. Overall, however, mollies prefer warm waters between approximately 75 and 85° F (24-29° C) and a pH above 7. They can be completely sooty black, speckled with various colors, have Dalmatian-like patterning, or any number of other colorations and patterns depending on the particular species.

Size can range from only 2 inches to 6 or more inches – the larger species, sailfin mollies, tend to be more expensive but are less likely to be eaten by koi if you incorporate them into your pond as full-grown adults.

Also with many varieties available, barbs range in size from only an inch to over a foot with a striking array of color options. The larger varieties, such as the bright silver 8+ inch tinfoil barb, are likely to do just fine with koi, particularly given the friendly nature of barbs, but smaller ones like the 2 inch pentazona barb should be kept separate.

The European barb varieties do best with temperatures typically somewhere between 70 and 75° F (21-24° C), while African varieties of course need warmer waters. Some barbs, such as the gold barb, like water temperatures that are in the mid to upper 60’s Fahrenheit, so as always be sure to conduct further research into the exact variety that works best for your location and pond.

Small catfish species that can be kept in ponds and aquariums include the cory catfish, glass catfish, bumblebee catfish, bristlenose plecos, and many others. Due to their small size (typically less than 4 inches), they should not be kept with koi if you want to be 100% sure they won’t be eaten or damaged. As many are bottom feeders and less likely to be constantly around the mouths of koi, especially during surface feeding times, they’re safer than other small fish here.

The appearance as well as water quality needs depend entirely on the species, though most of them are omnivores and will consume a mix of insects, vegetables, some fruits, algae, and other smaller fish.

Juvenile fish are, of course, on the smaller side and as such are more likely to be eaten by koi. Try to only keep fish that are close to the same size as your koi or larger, as obviously your koi will not be able to eat these fish. As mentioned above, koi will happily eat fish fry, even if it’s their own! As such, it’s best to incorporate only adult fish of other species into your koi pond, as the koi are likely to eat any fry or juveniles. You can keep juveniles and fry in a separate pond or a tank until they are large enough to be in the pond with the koi.

How to Prevent Koi from Eating Smaller Fish (Tips & Tricks)

Though it can be difficult to keep smaller fish with koi, it’s not impossible by any means. Some pond keepers have been able to keep koi and smaller fish together without incident, but if your koi are showing interest in other fish, there are some preventative steps that you can take.

First and foremost, make sure that your pond is large enough to comfortably accommodate all of your fish even once all of them reach their adult size. Keep your pond clean and maintained, while also feeding your koi adequate amounts of high quality feed so that they aren’t hungry and are therefore less likely to prey on other fish. You should also incorporate a variety of hiding areas into your pond for smaller fish. This can include a large amount of plants (which are extremely helpful to water quality, anyway), rocks, tunnels, fish shelters, and shallower areas along the edge that are too shallow for koi to get into but that smaller fish can escape to if needed. Make sure there are plenty of both floating and emergent plants in these shallow areas, such as native lilies, to help keep the water cool as it will heat up faster than the rest of the pond.

As mentioned above, you can also keep young fish and fry quarantined away from koi until they are large enough to safely be together. A perhaps less conventional method is to create a partition in your pond that isn’t visible from above but that will keep koi and smaller fish in separate areas of the pond, again making sure that there is enough space for all of them.

20 thoughts on “Do Koi Eat Other Fish? List of Fish NOT to Stock with Koi”