Depending on where you live, there’s a pretty large variety of fish that can be kept in outdoor ponds. You’ll have to be aware, of course, of their hardiness and whether or not they will be able to overwinter based on the climate that you live in. This is one reason of many why it’s critical that you research fish species to ensure the health of both your fish and your pond. In addition, some fish may get along well with others, and other species may be confrontational or simply enjoy eating fish that are smaller than them.

Another thing to keep in mind is that all fish have different requirements, so you’ll need to be sure that first, the fish you want can actually survive in an outdoor pond, and second, will be able to handle whatever conditions you have (water temperature, pH levels, ambient air temperature, nutrient levels, etc.). Below you’ll find a broad list of fish for just about any outdoor pond. 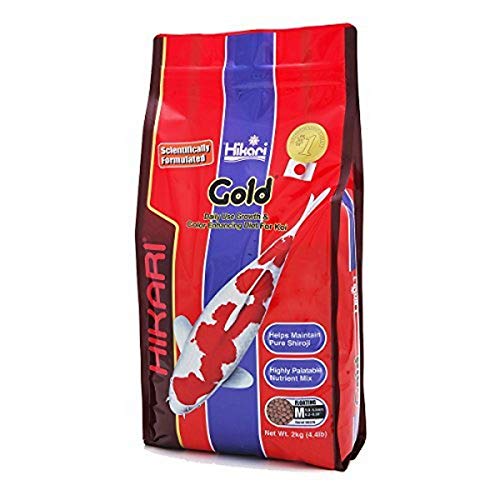 Originally domesticated from the Asian carp in China over 1,000 years ago, goldfish vary somewhat in coloration and a fair amount in size depending on the species – some may only grow to a couple inches long by adulthood, while other species can grow up to a foot. This means you can easily choose whichever species best suits the size of your pond. They’re generally pretty amiable, getting along with just about anything in the pond, but that doesn’t mean everything will get along with them – the smaller varieties are prone to being eaten by some fish, such as golden orfes (if the goldfish are a couple inches or less in size). Goldfish do best in a temperature range of 68 to 72 degrees Fahrenheit (20 to 22° C) and a pH range of 7.2 to 7.6.

While regular “feeder” goldfish (the variety covered above) tend to be energetic, fast, and enjoy swimming about, fancy goldfish are typically slow, and can’t really compete with other fish for food. For this reason, regular goldfish and fancy goldfish should not be kept together, nor should fancy goldfish be kept with really any fish variety that’s more rambunctious and eats the same food as fancy goldfish.

Fancies come in many varieties, and are often sought out for their varied, unique appearances that can really add a distinct, exotic flair to any pond. Most fancies do well with a temperature range of 68 to 74° F (20 to 23° C), though there are many different types that have slightly different requirements. Fantails (which have a forked caudal fin), for example, are healthiest in temps between 70 and 80° F (21 and 26° C), while lionheads are best adapted to temperatures as low as 65° F (18° C). In addition, they each have different temperaments, so further research will be needed before you choose a variety. Most can be kept in outdoor ponds so long as their temperature and pH requirements are met, but may need to be brought indoors for winter if ambient air and water temperatures drop too low.

One of the most popular pond fish species, and understandably so, koi are typically a maximum of a foot to three feet in size depending on the exact variety and have a stunning amount diversity in their coloration and patterning. There are over 100 different recognized koi subspecies within 13 official classes, meaning there’s a koi out there for just about anyone. They’re fairly tolerant of temperature shifts so long as they don’t happen too quickly, as with any fish this can cause stress, shock, or even death. A water temperature between 59-77° F (15 to 25° C) – which makes them pretty well suited to life in outdoor ponds – and a pH range of 7.5 to 8 works best to keep them strong and healthy. You’ll need to have a larger pond, at least a meter deep, if you plan on having any of these fish in your pond.

Orfes, also known as ides or golden orfes, typically grow around a foot to a foot and a half in length in ponds (they need to be at least 1,000 gallons and a meter or more in depth), though in larger ponds and lakes with plenty of food availability they can grow close to three feet. Golden orfes are extremely sensitive to water quality issues; in fact, many areas use the “golden orfe toxicity test” to determine water quality. If it’s not good enough for an orfe, the water is deemed unhealthy and in need of treatment. In terms of temperature, orfes are extremely hardy, making them ideal for outdoor ponds – they can tolerate water temperatures as low as freezing or as high as 90° F (32° C), but do best between 50 and 77° F (10 to 25° C), with a pH on the more alkaline side, between 7 and 8.

One of the most important things to keep in mind with orfes is that they’re exceptionally active. This makes them prone to oxygen deprivation, so you’ll need to make sure oxygen levels are high in your pond (a minimum of 7-8 ppm). It also means that they’re prone to jumping out of ponds, so having boundaries in place to prevent this is important – particularly since in many areas they’re considered an invasive species and should never be let out of captivity.

To being, pond sturgeons are large – even the smallest variety, the sterlet sturgeon, grows to a meter, while the largest, the beluga sturgeon, can grow up to 10 meters in length and several thousand pounds in weight. Do not keep a sturgeon if you don’t have a large pond or a lake. Sturgeons began to evolve about 250 million years ago, and as such are incredibly resilient (after all, they’re living dinosaurs!). While their temperature range depends on the exact species, generally so long as you keep the temperature above freezing and below 70° F (22° C), they should do fine (but of course do further research on the requirements of the particular sturgeon species you’d like!). They prefer darkness, as in the wild they tend to stay toward the bottom of water bodies, and as such they’ll need plenty of hiding places to protect themselves from the brightness and excess warmth of the sun. They also require a high quality sturgeon feed with upwards of 40% crude protein by weight for the best possible growth and health.

Plecos, which are exceptional algae-eaters that are easygoing and peaceful fish, getting along well with other fish species, are warm-water fish. As such, they need water temperatures that range from 72 to 86° F (22 to 30° C). Common plecos can be 1 to 2 feet long, while bristlenose plecos are only about 4 inches, so pond size requirements depends on the species that you choose. They do well in outdoor ponds, with one exception – they’re originally from South America, so if your water temperature drops below 50° F for more than a day or two, they’ll need to be brought indoors or they will likely die.

Siamese algae eaters are, as their name implies, excellent at consuming algae (which makes them particularly desirable to many pond hobbyists). They’re also pretty lively, and as such shouldn’t be placed with more docile fish species (such as fancy goldfish), as they may stress them out with their spirited nature. They typically grow up to 6 inches in length, and do best in waters that are 70 to 79° F (21 to 26° C), needing to be brought indoors if temperatures drop much below this for extended periods of time, such as during winter.

Weather loaches, also known as pond loaches, are quite tolerant of temperature shifts, able to withstand water temperatures anywhere from 40 to 77° F (4.5-25° C), meaning that they can generally stay in outdoor ponds even during the winter without any issues. You’ll want to get more than one of them, as they’re fairly social and enjoy staying in small groups with their own kind. In addition, they grow up to a foot and aren’t picky eaters, consuming algae, insects, vegetables, and food pellets without complaint.

Though often kept in aquariums, mollies and guppies can both do well in outdoor ponds. Both species will likely need to be brought indoors for winter, as mollies need waters above 75°F and guppies need waters above 50° F. They’re both easy and straightforward to take care of, though they breed quickly – you’ll likely need to catch some of them every so often and sell them to a local pet store (never release them into the wild!). They could also be used as a food source if you have a separate pond for turtles and frogs and the like.

Red shiners are a North American small freshwater fish with silver bodies (sometimes vibrant blue) and red-orange fins. They’re pretty small (about 3 inches in length), and are a cold water fish, preferring temperatures between 59 and 77° F (15-25° C). However, since they are often found in mountainous regions, they are able to withstand extreme temperatures (as low as -21° C), though this is of course not at all advised and they will need to be brought indoors for the winter if waters drop below their approximate healthy minimum of 59° F.

They’re a generalist species, well-suited to living just about anywhere, from cold mountain rivers to southern hot springs. In addition, in many areas they are considered invasive, both in portions of the U.S. and the U.K., so never release them into the wild or use them as bait for fishing in natural areas. Because of their rapid reproduction, they quickly become a problem species in the wild and cause all sorts of ecological damage.

Also known as the batfish due to its dark, almost bat-like appearance, the Chinese high fin banded shark is a suckering algae eater. They’re very peaceful and easygoing, compatible with just about any other fish, including koi, goldfish, guppies, and plecos. They are happiest when living in small schools of 3 or more of their own, but will do alright on their own as well, and need cool waters (with plenty of hiding places) between 55-75° F (13-24° C). This means that they can stay in outdoor ponds even during the winter, so long as you keep your water heated above this minimum range. Their patterning is quite striking, and though they can grow up to 4 feet in length, it takes them quite a few years to reach this point since they primarily feed on algae.

Pumpkinseed fish, a type of sunfish, are remarkable looking fish with bright coloration and patterning that are native to portions of North America. It’s an invasive species throughout the majority of Europe, so never release it into the wild if you live there. Their size varies from 3 to 8 inches in length, and are very active, preferring to live in small schools so if you want one, you’ll need to get a few to ensure their happiness. They’re tolerant of a range of conditions (with the exception of overall water quality, as is the case with most pond fish), but ideal water temperature for them is between 69 and 75° F (21 to 24° C), with an alkaline pH between 7 and 7.5. They work well in both large and small ponds, and are capable of overwinter so long as you keep your pond heated.